With the release of Hearthstone on iPhone and Android last week it’s never been easier to get into Blizzard’s online Card Game: Hearthstone. Many free-to-play games, and card games in general, are historically not actually free-to-play but very expensive. Free-to-try is a more accurate description of them. These free-to-play games are actually pay-to-win games when the only way to win or enjoy the game is by paying a ton of money to the so-called free game. For someone deciding whether they want to start playing Hearthstone, the actual price of the game is very important; so the question with Hearthstone is: is it free-to-play or pay-to-win? 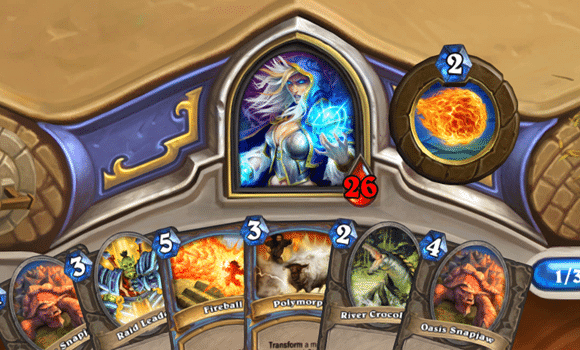 “If you don’t mind taking your time with the game, you can buy these packs with just gold and never spend a dime.“

In Hearthstone, there are two ways to purchase new packs of cards: real money and the in-game currency Gold. A single pack is about $1.50, or a little less if you buy them in bulk, or 100 Gold. Gold is acquired by winning games; you get 10 gold for every three wins up to a cap of 100 per day, or by completing daily quests. The daily quests are things like “win 2 games as paladin or mage” or “destroy 40 minions” and they get you around 40 – 60 gold. You get one new quest each day and can store three at a time, so you won’t be punished for not playing every day. For beginning players, there are a few ways to get a lot of gold quickly, by defeating each of the AI characters or winning a certain amount of games. With patience you could buy 1-2 packs every day. If you don’t mind taking your time with the game, you can buy these packs with just gold and never spend a dime. It will be slow, but entirely possible.

Blizzard recently released their second Adventure Expansion: Blackrock Mountain. The first expansion, Naxxramus, gave players 30 new cards, 15 boss battles, 9 class challenges and 15 heroic boss battles. By defeating each boss you unlock powerful new cards, including Legendaries like Kel-Thuzad. The expansion costs $25 for the whole thing, or 700 gold each “wing” with a total of 5 wings. The cards you get from the Expansions are pre-chosen and the same for every player, so you can actually see what card each boss will give you. This allows you to see if buying the expansion is worth it for you before purchasing, either with real money or gold. This is favorable to spend real money on compared to buying card packs, which are totally random and could give you nothing useful at all besides some cards to destroy for dust. 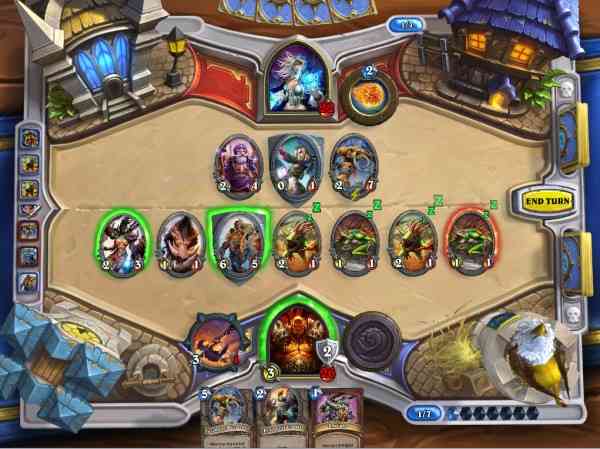 “Like all card games, physical and digital, Hearthstone is definitely pay-to-win-FASTER.“

The third way to get cards is by playing Arena. Arena costs 150 gold, or $1.99, and you draft a deck of 30 cards to play with. You then play games until you lose 3. You get rewards based on how many wins you get before you lose 3 games. You automatically get 1 card pack just for entering. So if you win no games then you have essentially paid 150 gold for a 100 gold pack. I don’t recommend doing the Arena until you have a firm grasp of how to play the game and what cards are good. At 3 wins you break even, and at 7 wins you pay for your arena ticket entirely.

Like all card games, physical and digital, Hearthstone is definitely pay-to-win-FASTER. If you drop a bunch of money into it you will have more good cards right away, and therefore win more often. But if you play free-to-play you will get the same good cards, but it will just take much longer. There is nothing you buy with real money that you cannot buy with Gold. Someone who drops money down to get 30 packs right off the bat will instantly have some better cards, whereas it could take a free-to-play player a month to get those cards.

Of course your deck is only so much, you also have to know how to use it. By playing free-to-play you’ll learn the game while you build your collection. You will lose a lot in the beginning, because of lack of knowledge and lack of good cards, but if you take your time and put in some work you will very quickly start to win games. It is entirely possible to play only free-to-play; but, if you are willing to put in a small investment you can start to enjoy the game a lot more even faster by following my recommendation. 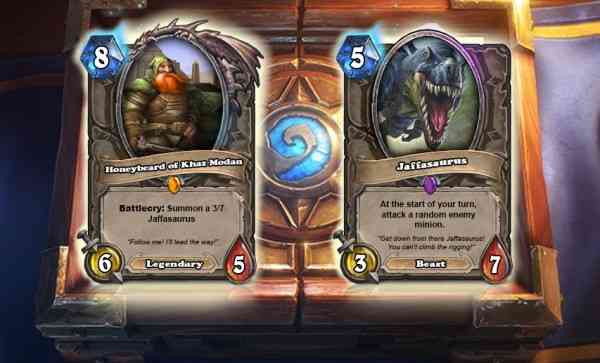 “Adventure Expansions always give you something good, and they have some very unique and fun boss battles.“

My recommendation to someone who wants to start playing Hearthstone but doesn’t want to spend money on it is to only spend money on the Adventure Expansions. For $25 you not only get guaranteed good cards, but you also get single player content and more stuff to do. Some of the cards in Naxx and BRM have even become some of the best cards in the game. You will see a bigger jump in your decks from these expansions than if you spent the same amount of money on packs. Besides that, you save the 3,500 gold you would have spent on the expansion to purchase 35 more packs.

By playing through all of the content in Naxxramus or Blackrock Mountain, you will also learn more about the game and how to build a deck to counter specific boss battles. Of course, you should play the game for a bit before you purchase the expansion so you can get a feel for it and have a few new cards to deal with the bosses. Buying packs with real money adds up very quickly and can sometimes give you nothing to show for it, but Adventure Expansions always give you something good, and they have some very unique and fun boss battles. This is all I’ve spent money on so far, and I have a few competitive decks. I’m far from becoming the best player, but I’m having a great time with Hearthstone.

Next The Age of the Remaster (or How to Create the Illusion of Choice)
Previous Project CARS – Could it Have a Preordained Pole Position as the Best Sim Racer Ever Made?