Desperados III is a real-time tactics game set in the Wild West where you help gunslinger John Cooper on his quest for vengeance. You control up to five different characters on your team, each with a specific set of skills and abilities, as you make your way through levels that look straight out of a classic Western film. In our review of the game, we called it “an outstanding accomplishment” that should not be missed, and gave it a raving 90/100. Now, we’re here to unpack the beautiful Desperados III Collector’s Edition and talk about all of the goodies inside.

The Desperados III Collector’s Edition retails for $119.99 for PS4 and Xbox One, and is also available on PC from Amazon Mexico. It comes with a concept art book with around 60 pages of fascinating sketches, scribblings of different notes from the creation process, character models and paintings of scenes and environments from the game. There’s even a full chapter on the making of Desperados III, which includes a written piece from Filippo Beck Peccoz, the Audio Director and composer, about the interesting production and origination of the game’s sound and audio. In addition to the sound and audio design, you can also see drawings that lay out the moment-to-moment scenes of the initial Announcement Trailer or even the different drafts for the game’s logo. It’s one of the more interesting concept art books I’ve flipped through due to its spotlight on these more easily-overlooked aspects, and the book itself is not too tall to stand on a typical bookshelf and has a nice, matte cover.

Not only does the Collector’s Edition feature the concept art book, but it also comes with 8 art cards, 5 of which display a different main character and their respective Wanted posters, and the other 3 being concept art from the game’s environments. There is also a copy of the original soundtrack that sits in a tall, sleek CD case and includes 33 evocative songs that transport you straight to the frontier. (If you don’t pop that bad boy into your stereo for your next scenic drive, you’re seriously missing out.) 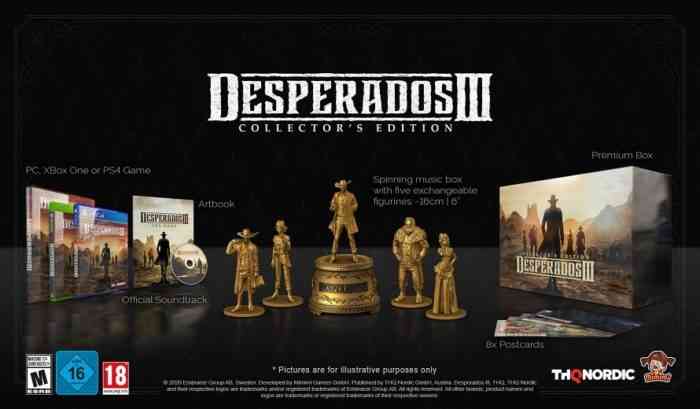 I’ve been saving the best for last: The star of the show in the Desperados III Collector’s Edition is, of course, the music box. The music box is made up of a golden base with the words “Desperados III” printed across it and comes with five interchangeable figurines that plug into the top and spin when wound up. The individual figurines are each of the five main characters, and the characters are easily distinguishable from one another due to the beautiful carved detail of each model. My personal favorite is John Cooper in his braced stance holding out two pistols. When the figurines are not plugged in to the music box, they stand nicely on flat, round platforms, making them easily displayed together on any surface. The music box is a gorgeous and unique item that definitely steals the spotlight of the Collector’s Edition, and it can be comfortably stored back in the original box with custom plastic slots that securely hold each figurine.

The Desperados III Collector’s Edition is a lovely edition with a solid amount of content for any major fan of the game. In addition to the concept art book, cards, soundtrack and music box, you will also receive a physical copy of the game and a code for a season pass. The Collector’s Edition can be purchased today at Gamestop and Amazon.