It is a muggy August night, and I am standing inside a Manhattan ballroom, waiting patiently to speak to one of the WWE’s biggest superstars, the one and only Dolph Ziggler. Having just gotten a chance to go one-on-one with 2K’s latest wrestling game, WWE 2K16, at the kickoff to Summer Slam in New York, I now find myself with the chance to chat with one of the actual human beings behind the characters in this game, and get his thoughts on being involved in it.

It is such a surreal feeling to play a videogame – any game, not just WWE 2K16 – and then look over and see one of its characters there, in the flesh, standing and talking not five feet away from you. Imagine you’ve just played through God of War, and then you get to speak with Kratos himself, with Ares’ blood still smeared on his face. As a gamer, I know I have to take advantage of this opportunity while I have it. 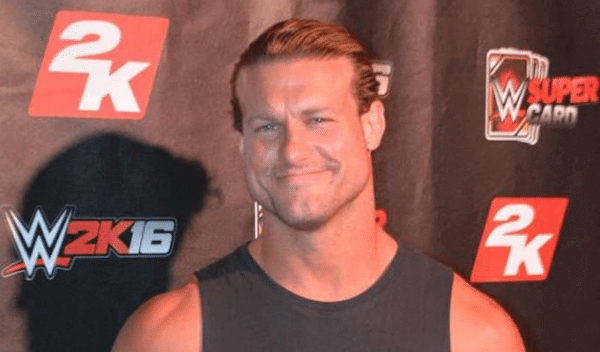 For his part, Ziggler holds court confidently and expertly in front of a 2K/WWE-branded backdrop, taking and answering questions from some of the world’s largest media outlets with the cool control of one who is well used to having the attention of a crowd of people. I’ve heard of some sports and entertainment icons who complain about the constant, intrusive glare of the public spotlight, but watching Ziggler speak as I wait, I get the sense that he genuinely enjoys all of this.

In the WWE, every star has a nickname. Ziggler’s is “The Showoff,” a moniker that has me a little nervous, giving me visions of an impending celebrity smack-down after I ask what he will probably consider an unworthy question. If you’ve ever seen Ziggler on WWE Download, you know he is quite capable of making an ass out of you, should you give him the opportunity. And let’s not forget, he has played the “Heel,” or bad-guy role in the WWE plotline in the past (it goes back and forth, depending on when we’re talking), so he knows how to be mean to people. My turn finally comes, and I step forward into the hot lights with The Showoff himself. Here goes.

“Ziggler holds court confidently and expertly in front of a 2K/WWE-branded backdrop … with the cool control of one who is well used to having the attention of a crowd of people.”

“Growing up, were you a video gamer? What were your favourite games?” I ask, bracing myself, after a quick and awkward hello. Dolph Ziggler (real name Nick Nemeth) is an accomplished high school and college athlete, a muscular macho-man with the jutting jaw and piercing eyes of a Hollywood action star; picture a young Kurt Russell in Escape from New York, minus the eye-patch, but with the same raspy voice and mischievous grin. Ziggler looks like he spent a lot more time playing sports and attending parties in high school than playing video games. But, to my surprise, his face lights up, and he jumps into his answer with an unexpected passion. 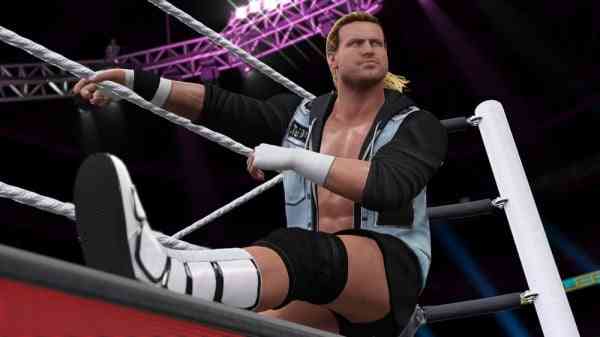 “Absolutely, I loved video games!” he says right away. “I was a Genesis guy. I really liked Castlevania but — was that Genesis?” He stops and looks at me.

“Uh, yes,” I answer, caught off guard by his question. Then right away, I remember it was on NES, and technically Castlevania: Bloodlines was Genesis – but whatever, close enough, I don’t want to side-track him so I don’t say anything. Smiling, he continues.

“I really liked Castlevania, but I never got to the end. Battletoads I liked, and all the Maddens, including the Genesis Madden, where you’d tackle the guy out of bounds to get the 15-yard penalty.” Ziggler laughs, as if recalling something he hadn’t thought about for a while.

“Ziggler’s nickname is ‘The Showoff,’ a moniker that has me a little nervous, giving me visions of an impending celebrity smack-down after I ask what he will probably consider an unworthy question.”

Encouraged by his enthusiasm for my first question, I grow bolder, and ask him what it was like to appear as a character in a video game. Was it creepy? Was it surreal? I mean, the photo-realism I saw in WWE 2K16 when I tried it out made me wonder: is it an unsettling experience for him to see himself so perfectly reproduced in polygon form? Ziggler shakes his head and smiles his trademark wide, warm smile.

“No, no not at all. It was great,” he says. “2K16 is awesome. Not only do they scan you, and they get all of your gear – but dude, my scar is probably going to be in this video game, that I got 3 months ago from Sheamus!”

For those who are unaware, Sheamus “The Celtic Warrior” is another WWE star (and another one of the 120 characters in the game) against whom Ziggler recently squared-off in a Payback bout. The scar he mentions was likely the result of a nasty boot delivered by Sheamus to Ziggler’s face near the end of the match. 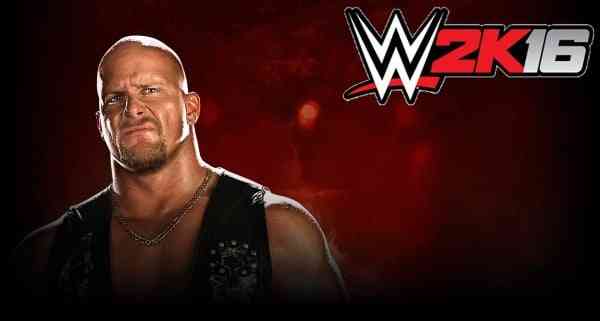 “It is SO up to date, it is so cool,” Ziggler continues. His hands reach out and gesture as he speaks, much like I have seen wrestlers do when they are interviewed on the TV show. “It’s not just like ‘oh, I have this blonde hair.’ Because I have dyed it, it’s actually brownish, or whatever, and that’s how real it is. It’s not just ‘here’s some thing that’s almost like the real thing,’ it is an exact replica of these WWE Superstars, and it’s mind-blowing.”

“2K16 is awesome. Not only do they scan you, and they get all of your gear – but dude, my scar is probably going to be in this video game, that I got 3 months ago from Seamus!”

Listening to Ziggler describe the experience, you get the sense that he is having a great time, and loves being involved in WWE 2K16. And should I have been surprised? I mean, the chance to be in a video game is something any of us would love – in fact, it would be a dream come true.

Here is a guy who has dreamed of being a WWE superstar since his dad first took him to see Hulk Hogan vs. Harley Race in Cleveland at 5 years old. Ziggler tells me he decided right then, at 5, he wanted to wrestle, and 3 months later, he started wrestling. Think about that – wrestling, at 5 years old. Then all through high school, then college; winning so many matches, he set a record at Kent State for wins by a single athlete. And now he is living that original dream, wrestling in the WWE itself. And to top it all off, he is now immortalized as a video game character in WWE 2K16.

Are you kidding me? Of course it would be frickin’ cool. 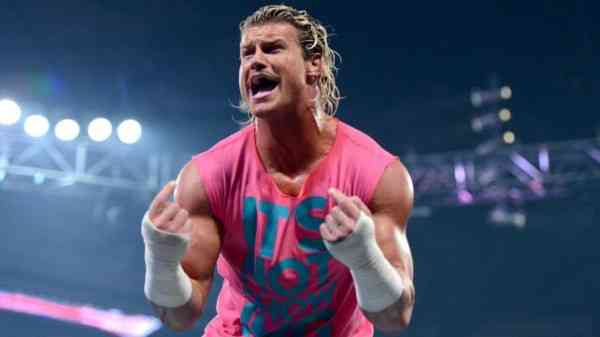 I finish off by asking him about the choice of Stone Cold Steve Austin as the cover star for the WWE 2K16 game. Some have questioned the choice of Austin, who hasn’t wrestled for years. I wonder if Ziggler “The Showoff” will answer in character and throw some bombastic shade at the older generation. But, again, Ziggler surprises me with a remarkably thoughtful – and respectful – take.

“It’s great, it’s great,” he says of the choice, without hesitating. “Austin covers so many different decades, whether we go back, 20-something years as an up-and-comer, or the Attitude Era where he was running everything on top. Or even now, where he’s not so much in the spotlight, but he’s still behind the scenes, doing something like podcasting about up-and-coming talent, and always involved in the WWE, or making movies – you name it. He’s a great guy, because whether you grew up, like I did, in the Attitude Era, or you’re a fan now, you know Stone Cold Steve Austin.”

“Ziggler’s passion for wrestling, and for video games, has been there from the start, and it has clearly never left. My brief talk with this character from WWE 2K16 has only made me more excited to play the game itself when it comes out.”

As Ziggler answers, I am struck by how much reverence and genuine admiration he has for Austin, one of the all-time great icons of the sport. In the ring, Ziggler “The Showoff” may play a role, and play the role well. But tonight, I feel like I am speaking to Nick Nemeth, a down-to-Earth, approachable guy who is a lot like the fans who watch him wrestle, or play him as a character in WWE 2K16.

I walk away very impressed with Dolph Ziggler, or Nick Nemeth – the truth is, there is no difference. The only dividing line between Nemeth and Ziggler is a little bit (ok, a lotta bit) more hair dye, a nickname, and some more theatrics in the ring. The passion for wrestling, and for video games, has been there from the start, and it has clearly never left. My brief talk with this character from WWE 2K16 has only made me more excited to play the game itself when it comes out, and when I do play the game as Ziggler (which I will), I will definitely be looking closely for that scar, and I have a feeling I will see it.

WWE 2K16 is due to release on all consoles October 27th, 2015. We’ll have a full review here when it comes out, but make sure to check out our Hands-On Preview until then.

Next 3 Up, 3 Down – The Best (and Worst) Games From August 2015
Previous NHL 16 Developer Interview -The Critics Spoke, The Fans Yelled, and EA Sports Listened