Today, Psyonix and Ford revealed a new collaboration that will bring some new additions to Rocket League. The electric Ford Mustang Mach-E SUV and the classic 1965 Ford Mustang Shelby GT350R will be racing into the game later this week. 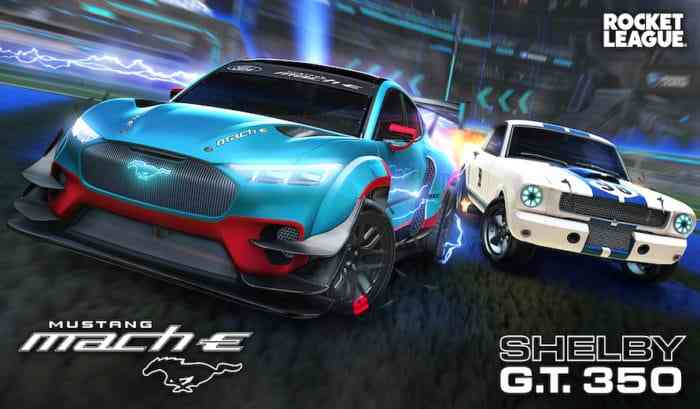 Both cars will come with special wheels, decals, player banners and engine audio to use in Rocket League. The Mustang Mach-E will have a visual lightning effect to reflect its electric engine when it reaches supersonic speed.

Already the second addition to the shop this month, Rocket League players on all platforms will be able to purchase these cars from December 9 until December 22. The cars will be sold for 1100 credits each, or 2000 credits in a bundle. The new vehicles are highlighted in the trailer below with the GT350R in its classic colourway.

The two companies also formally announced Ford will be returning as the presenting sponsor for the upcoming Rocket League Championship Series. The event will occur from December 8 through December 12 in Stockholm, Sweden. This is a cross-regional event that will bring players from all over the world to compete against one another.

In addition, Ford will also be sponsoring the second Ford + Rocket League Freestyle Invitational. This will take place from December 15-16, exclusively for players in the United States. Players will have a chance to win a real-life 2022 Ford Mustang Mach-E.

Get a Free Car in GTA Online