Next weekend, a lucky group of Elden Ring fans will be able to play the game early and check out exactly what everyone is in for. Last week’s gameplay trailer has shown us what dangers and adventures await in the Lands Between, but you will be able to choose how you explore and defeat your enemies.

Veteran players of the Dark Souls series and other FromSoftware games will know about the different starting classes that are offered to players. The available classes vary from game to game, but they all give your character a different starting point in terms of stats, which you can then sculpt to your preference. 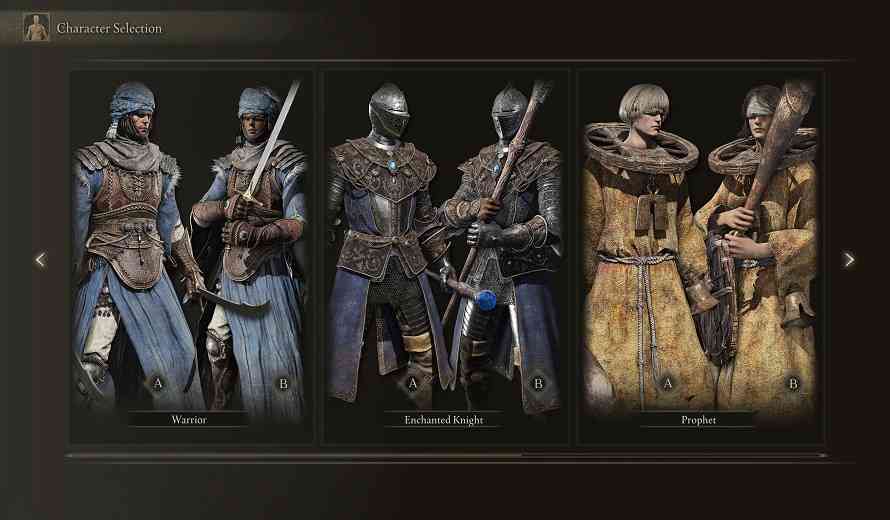 Elden Ring will work in the same way. The closed network test will allow players to pick between five different classes; the Warrior, Enchanted Knight, Prophet, Champion, and Bloody Wolf. The names do not exactly spell out what balance of skills they will have, but maybe you can figure it out by looking at them.

Of course, the Warrior seems like a pretty straight forward melee class, the Prophet looks to be someone who relies mostly on magic, and the Enchanted Knight looks like a blend of the two. Bloody Wolf has a cool name, so they have that going for them. No matter which you pick, there are two body types of each.

In seven days, these five brave Tarnished will cross the Sea of Fog.#ELDENRING pic.twitter.com/t7SNykhr3E

Coincidentally, there are five sessions that will be available to play in the closed network test. If you feel like it, you could play each of them with a different class, to feel them all out. The Dark Souls games have between 8-10 classes available, but there is no telling how many we can expect to start with in Elden Ring. Elden Ring will be coming out on February 25th, 2022 for PC, PS4, PS5, Xbox One, and Xbox Series X|S. Be sure to check out the purchase and pre-order options.

Which class will you be trying out? Let us know in the comments below.