Today, a new update comes to Mario Golf: Super Rush. There are several things we should note that players can enjoy. Along with improved motion controls, which is always welcome, there is a new character, new course, and new mode to play in.

Toadette is back again. She made her Mario Golf debut in Mario Golf: World Tour for the 3DS and she was present in the story mode. Her Special Shot is the Super Pickax Stinger, where she uses her tool from Captain Toad: Treasure Tracker. During her Rush ability, she appears to throw turnips and bashes opponents in her way. 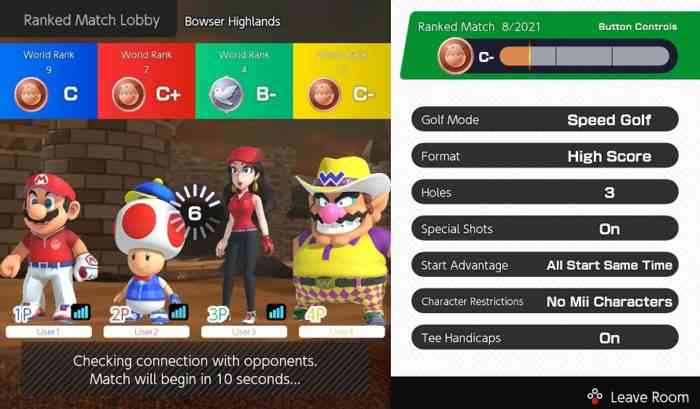 The new location should be familiar. The new course will be played in streets of New Donk City, which players of Super Mario Odyssey should recognize. The course should be fairly straight forward since it does not look like you can shoot over the tall buildings to get to the green, though there may be some unconventional obstacles for this unconventional course.

Next, Mario Golf: Super Rush is adding a Ranked Mode, which appears similar to the Ranked Mode in Mario Tennis Aces. Ranked matches will have certain rules, like character restrictions and a Special Shot toggle.

By climbing the ranks of every month, players will unlock things like cosmetics. The first unlock will be color selection for Yoshi, who will be able to choose red, blue, or yellow, as well as the classic green.

This update goes live today, so you can get your rank up as soon as possible. Mario Golf: Super Rush is available exclusively on Nintendo Switch.

Will you be playing Ranked Mode? Let us know in the comments below.