The gameplay trailer for Bomb Rush Cyberfunk was released today, hinting at an exciting new game heavily inspired by Jet Set Radio.  This game, described as “1 second per second of highly advanced funkstyle,” will be released as a timed exclusive for the Nintendo Switch, but will also release on further platforms in the future. 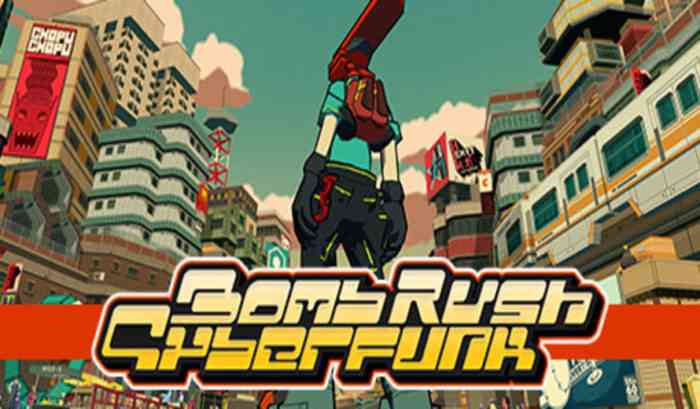 The trailer reveals the main gameplay of Bomb Rush Cyberfunk.  As the game’s inspiration is Jet Set Radio, the game will allow players to skateboard through a bustling city and perform tricks.  Based on the trailer, this will include wallriding and skating on rails.  The player can execute tricks and graffiti various spots around the city to increase their score.  Performing a combo will convert the score to “boost power,” which will allow the player to increase their speed.

In game, the player will need to face cops, who are hinted to have rocket propelled chains.  In addition, your character will need graffiti spots in multiple neighborhoods as well as challenge local crew for control of territories.  To accomplish this, you can select any character from your crew as well as take on “graffiti spot” challenges, where you attempt to hit targets to create a piece of graffiti art.

The main visuals of this game will be a cel-shaded and vibrant art style reminiscent of Jet Set Radio.  In addition, the soundtrack will be composed by Hideki Naganuma, who has also worked on Jet Set Radio.  The game will focus on a sole single player experience and will be released in 2022 for the Switch as well as all platforms.

What do you think of this exciting new gameplay trailer reveal? Let us know down in the comments, or hit us up on Twitter or Facebook.

Hover Review – Still a Grind After All This Extra Time