The Street Fighter franchise has grown immensely over the past few years and as of March 31st, 2021, Street Fighter V has sold 46 million units worldwide since its release on PC and PlayStation 4 in 2016. With iconic characters such as Ken, Ryu and Chun-Li , it is no surprise that there are constant crossovers and events into other video games, such as Fortnite and others. Garena on the other hand is a well known developer and publisher who released Free Fire, its self-developed battle royale title on mobile devices in 2019 and 2020. Garena is also familiar with major mobile game titles such as League of Legends, Call of Duty Mobile and Arena of Valor. Free Fire has officially announced that the crossover event with Street Fighter V is now live, with costumes, item reskins and more!

From today, Street Fighter will take over Free Fire as fans can look forward to the ‘Free Fighter’ event that transforms the game’s main lobby as Street Fighter’s famous Air Force Base Background will be showcased. Besides that, players will have the opportunity to learn Ryu’s signature move, Hadouken, as a special attack in Free Fire. When players use the special move, Ryu sends a surge of enemy from his hands at the enemy. Players will be able to use the famous move as an emote!

Besides the skills, the Street Fighter V collection allows players to fight in style with Chun-Li’s iconic outfit featuring her blue qipao and spiked bracelets and the Gloo Wall skin. Players will also be able to use Ryu’s outfit, Hadouken grenade and the AMW gun skin amongst others. 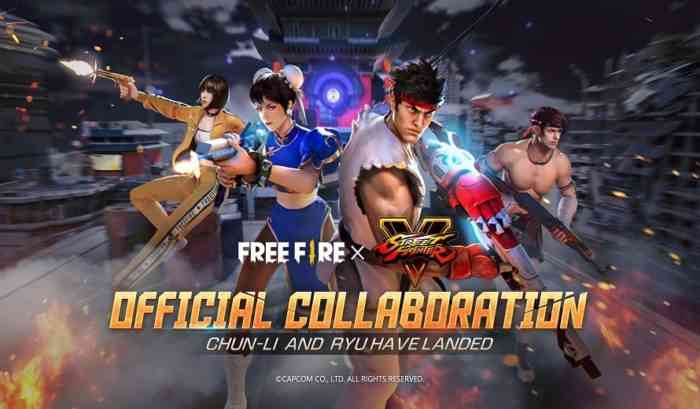 Free Fire can be downloaded for free on iOS and Android devices.

What are your thoughts on the collaboration? Do you play either game? Let us know in the comments below or on Twitter and Facebook.