It’s been a source of discussion, disagreement, and argument for years – are video games really an art form? Mostly brought up in reference to bigger AAA titles like FIFA or Call of Duty, public opinion has been slowly shifting over the last couple of years towards accepting games as art. However, there are some instances where it’s difficult to deny that a game is a piece of art – and the newly-released VR title The Secret of Retropolis is one of them.

The Secret of Retropolis is a seated VR mystery-adventure game, set in the robot-filled city of Retropolis. You play as Philip Log, a former cop who’s been hired by a robotic movie star for one last shady job. Along the way, Philip will uncover a deep-rooted conspiracy that’ll affect the fate of Retropolis itself. The game is heavily inspired by the classic point and click adventure games of LucasArts, like The Secret Of Monkey Island.

Last week, The Secret of Retropolis was premiered at the Cannes Film Festival as part of the VeeR Future Award, a newly-established award for the festival that features “a selection of the most immersive, compelling and innovative VR works to celebrate each creator’s achievements in VR storytelling”. Unfortunately it didn’t take home first place, but getting featured at such a prestigious awards show is a huge achievement in and of itself. 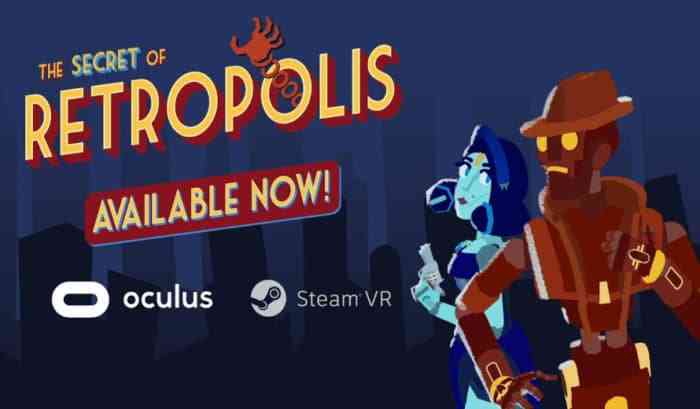 According to developers Peanut Button, “The Secret of Retropolis is a seated game with intuitive mechanics that make the game accessible to all VR players. Using Philip Log’s stretching arms, the player can extend their reach, perform actions from afar and collect items to solve the game’s puzzles.” We get a glimpse of this fast-paced investigative gameplay in the colorful, “mixed-reality” launch trailer that’s just been released.

The Secret of Retropolis is available right now on PC VR and Oculus Quest.
SOURCE

Warhammer Age of Sigmar: Tempestfall VR Review – Tempestfall Stuck In A Teapot?
Next
Halo Infinite Beta Coming Very Soon – According to 343
Previous
Time Is Running Out For These Xbox Game Pass Games That Disappear July 31st