Fans of the Alien series will be looking forward to the end of the Summer. The upcoming game, Aliens: Fireteam Elite will be coming out in late-August. Squads of three players will be fighting their way through areas of the Endeavor with various weapons, in a desperate struggle for survival. The newest trailer shows us a few gameplay clips, including customizable Fireteam loadouts and Xenomorph variants. We also get some information regarding the game’s release; a release date and details about extra content. 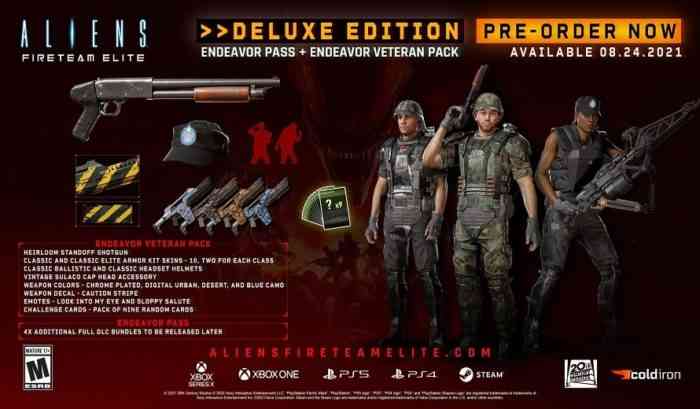 Pre-ordering any edition of Aliens: Fireteam Elite will get you the Hardened Marine Pack. This comes with the Digital Red Camo weapon color and three weapon decals, which I assume can be applied to any weapon type. It also comes with the “Chestbuster” emote and the Bandana accessory for your character. The Deluxe Edition of the game comes with the Endeavor Veteran Pack and the Endeavor Pass. The Endeavor Veteran Pack contains the Heirloom Standoff Shotgun, the Classic and Elite Classic Armor skins for each class, the Classic Ballistic and Classic Headset helmets, the Vintage SULACO Cap accessory, several weapon colors (Chrome Plated, Digital Urban, Desert, and Blue Camo), the Caution Stripe weapon decal, the Look Into My Eyes and Sloppy Salute emotes, and nine random challenge cards.

The Endeavor Pass will cover the cost of four post-launch DLC packs, the contents of which have yet to be announced. Aliens: Fireteam Elite will be coming out on August 24th for PC, PS4, PS5, Xbox One, and Xbox Series X|S.

Will you be pre-ordering Aliens: Fireteam Elite or getting the Deluxe Edition? Let us know in the comments below.