Dragon’s Wandering Tavern Will Trade You a Magical Reveal Trailer

A Peaceful Roguelite? Is That Even Possible?

Studio Ghibli and the notoriously brutal roguelike genre sound like they should have absolutely nothing to do with each other, but the newly announced indie game Dragon’s Wandering Tavern has somehow managed to blend the two. With a combination of randomized but peaceful Ghibli-inspired landscapes and grinding-heavy gameplay that tasks the player with gathering resources from an ever-shifting forest, this title promises a fantasy management game like no other. Players take on the role of Dangoru the Dragon Merchant, a jolly green giant who must explore the enchanted Wandering Forest and befriend the magical creatures that live there. Lush pixel art brings wondrous environments and playful creatures to life. Rather than engaging in combat, players will master harvesting and crafting mechanics to create enchanted items, brew magical potions, and cook delicious meals for forest friends.

Not only does this game look like a ton of fun, it also offers a unique opportunity for people who aren’t into combat-heavy games to experience roguelite mechanics. There are few games more addicting than a good roguelite and the randomization aspect adds a ton of replay value, rewards greater effort and skill, and gradually takes over your entire brain. Add in a striking aesthetic, some very creative creature designs, and a magical forest that we’d love to explore, and Dragon’s Wandering Tavern looks like it’ll be a fantastic time.

The trailer shows off trading mechanics, a tavern building that walks on what appear to be feathery chicken legs, and a very sweet owlbear. Players will use the mysterious Shard of Elderlight to help out lost animals they encounter in the forest and use Chompy the Chest as an all-in-one inventory and crafting station. Add in a story about building a family of cute and quirky creatures and a forest that rearranges itself every night, and you have a recipe for indie game goodness. 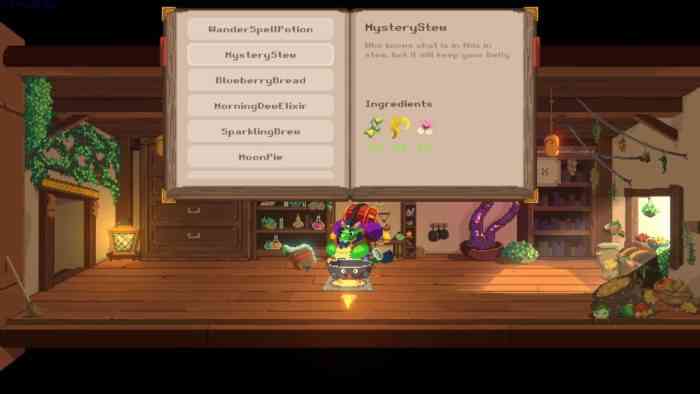 Dragon’s Wandering Tavern will be available for PC in Q4 2021. It can now be wishlisted on Steam.

Are you ready to try a peaceful roguelite? Let us know down in the comments, or hit us up on Twitter or Facebook.