The classic arena battle game with bombs, Bomberman has taught the last few generations of gamers that blowing stuff up is cool. It is already out on Stadia now, but later this month, the newest game in the Bomberman series will be coming to Switch, PS4, and PC as a free-to-play battle royale game. Super Bomberman R Online appears to be much like the 2017 Super Bomberman R, only online. Instead of facing off against seven of your friends on your eight-person couch, you will be in a 64-person battle to outlast and destroy each other. Last bomber standing wins. 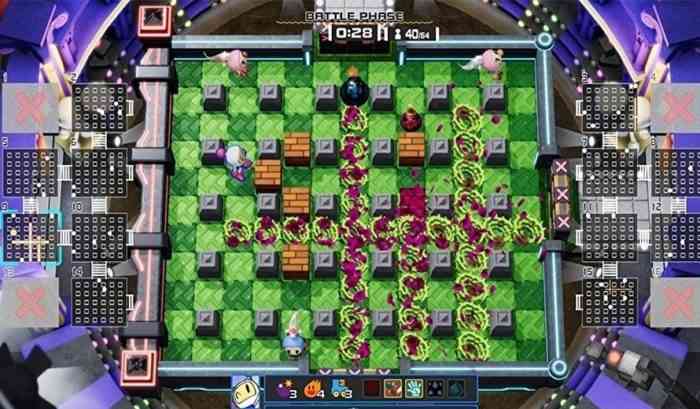 If you are familiar with the standard Bomberman game arena, you would know that fitting 64 players in could be a challenge. What Super Bomberman R Online is doing is setting up 16 areas of four combatants. These areas are connected on the edges and will gradually become off limits, like a storm forcing players into smaller play zones. You can also keep an eye on other zones by watching the maps, kind of like Tetris 99. With that many players, it can be hard to keep track of yourself sometimes, but Super Bomberman R Online has a pretty sweet way of customizing characters. Different characters have different skins and costumes. Players can also customize the visual patterns of their bombs to look like popcorn, cell-shaded smoke, roses, light, and many other things.

Will you be trying out this Bomberman game? Let us know in the comments below.