Juxtaposition, as defined by Oxford Languages: the fact of two things being seen or placed close together with contrasting effect. Example: Super Animal Royale. This 2018 battle royale dropped into the BR scene on PC at about the same time as 100 others to fight it out for supremacy. It is packed with cutesy animal characters that sing, dance, and kill. After a few years available only on PC, Pixile Studios and Modus Games are bringing Super Animal Royale to all major consoles in early June. It is the anti-PETA. 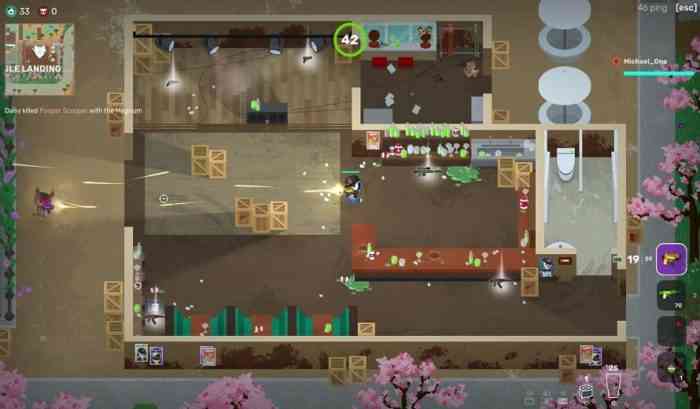 A wonderful trailer for the console version of Super Animal Royale has been released. We see all our favorite animal friends singing in a musical, like a quartet of sheep, a Village People of birds, and burlesque beavers(?). Like of kind a Ballroom Blitz, a fight breaks out, but amazingly, the song keeps playing. The show must go on, I guess. In sing-song fashion, we are shown all the elements to this 2D arena battle royale. There are semi-automatic weapons, automatics ones, throwable weapons like grenades, and things that will help you get around, such as mountable emus and a protective hamster ball. These tools will help you survive the animal kingdom as deadly skunk gas closes in on you.

🎶 We are the Super Animals

And we’re coming to CONSOLES 🎶

Super Animal Royale has wracked up Overwhelmingly Positive reviews on Steam and soon, console players will be able to join in the rat race, as crossplay and cross save capabilities will be implemented. Super Animal Royale is available now on PC and will be coming out on June 1st for Nintendo Switch, PS4, PS5, Xbox One, and Xbox Series X|S.

Have you tried Super Animal Royale on PC? Let us know in the comments below.