Since its launch in 2020, the gacha-based action RPG Genshin Impact has taken the world by storm. With a recent update bringing the game across systems and onto the PlayStation 5, Genshin Impact’s player base has only grown bigger and bigger along with the regular release of new content. This June, version 1.6 will bring players on a summer adventure into a mysterious archipelago of islands. A new trailer has revealed details of new plot developments, new characters and brand-new features coming to Genshin Impact.

An island-hopping adventure on the high seas awaits in 1.6, with the heavily leaked Midsummer Islands finally becoming playable. A brand new playable character, Kaedehara Kazuha, will also be added in 1.6, playing the central role in the new Archon story quest that will bring players into the new Inazuma storyline, marking the story’s second part. Kazuha is a 5-star Anemo character that uses swords and Elemental Mastery, introducing new gameplay mechanics as he levels up.

Version 1.6 will feature another heavily speculated feature: Character skins! Premium skins for both Jean and Barbara have been revealed, although only Barbara’s will be available through in-game activities. Though the exact pricing of these skins has not been revealed yet, they’re rumored to cost $20 – Yes, you will have to pay money for them. With the rest of the game being based on a highly monetized gacha system, it’s no surprise that miHoYo have introduced the tried and tested money-making machine that is premium skins to Genshin. 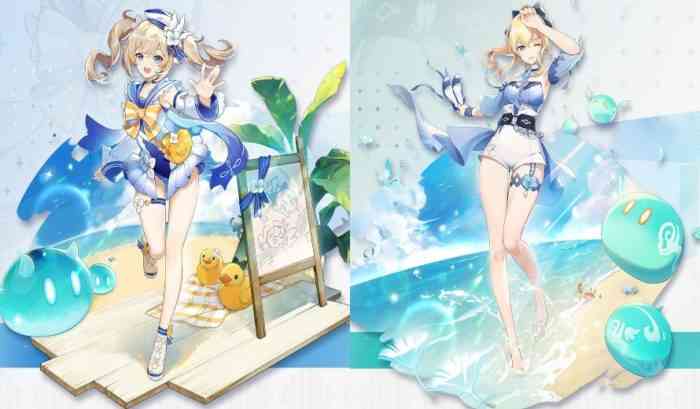 The trailer’s description hints gives a look at the plot of Version 1.6: “In the sweltering summer, a strange letter is discovered on the windowsill, with a spiraling fog shrouding a mystery far away. Following the sound of the crashing waves to find the truth, sparks dance on the horizon as the fleeing sun shines brightly across the sky. For her best friend and for the great adventure ahead, our youngest knight is ready to embark on her journey — let’s go!”

You can check out the first trailer for Genshin Impact Version 1.6 here:

The 1.6 Midsummer Island Adventure update will be released on June 9th.