Two months ago, Capcom began the release of Street Fighter V Season 5 content, which included Dan and the bonus character Eleven. This month, another returning character joins the game. The tarot card wielding Rose, who first appeared in Street Fighter Alpha. Rose is a very interesting character, visually and in combat. She uses magic to compliment her physical attacks. Her scarf moves like those ribbons that dancers use in that one Olympic event where no one really understands what’s going on, so judges score competitors high to seem like experts. You know the one. 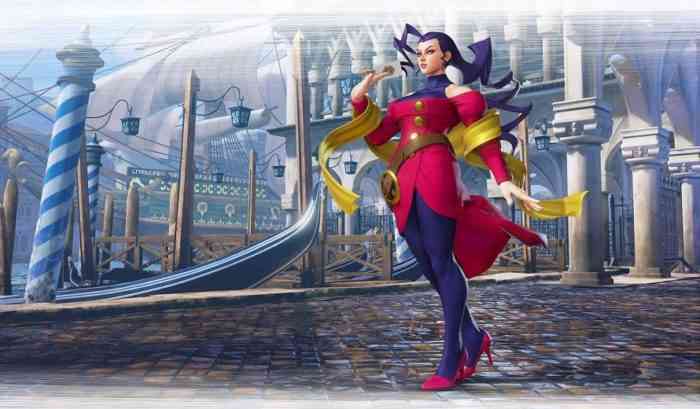 If you pay attention to the color of those swirly attacks, they actually tell you if they are light, medium, or heavy attacks. She uses the Soul Power, like her apprentice Menat, who also appears in Street Fighter V. Her tarot card abilities have effects that can buff Rose or debuff her opponents. She also can activate the Soul Satellite, which can surround Rose with up to two revolving orbs that damage her opponents on contact. Her Soul Illusion ability activates an ethereal copy of herself that mimics her like a shadow. The Soul Illusion’s moves are slightly delayed, so each of Rose’s strikes hit twice.

The stage that Rose is accompanied with is called Marina of Fortune, which is a remake of the stage Port of Genoa from Street Fighter Alpha 2. Rose has six different costumes. Her standard outfit is a purple bodysuit covered by a pink coat. Her Story costume is her red evening gown. Her Battle costume is inspired by pirates. Her Nostalgia costume puts her in a mime’s outfit with a mask and hat. Her Summer costume is a pink one-piece swimsuit with a large hat. Her Track Suit costume is exactly what it sounds like, a track suit. Street Fighter V is available for PC and PS4.

Are you getting the characters for season 5? Let us know in the comments below.

Back To The Courtroom In The Great Ace Attorney Chronicles
Next
NieR Replicant ver.1.22474487139… Will Contain an Extra Episode on Release
Previous
Newgrounds Sensation Friday Night Funkin’ Kickstarting a Full Game