Dating is hard. Your approach, your opening line, your tone; everything has to be calculated. Thankfully, we have the Super Seducer series. The creator and star of the games Richard La Ruina leads players through a number of scenarios where he tries to charm women. There have been two Super Seducer games released thus far. Though these games are FMVs, players can choose dialogue options to control the direction of the conversation, like in other dating sims. La Ruina was hoping to launch Super Seducer 3 on Steam, but has run into problems with Valve that could threaten the entire release. 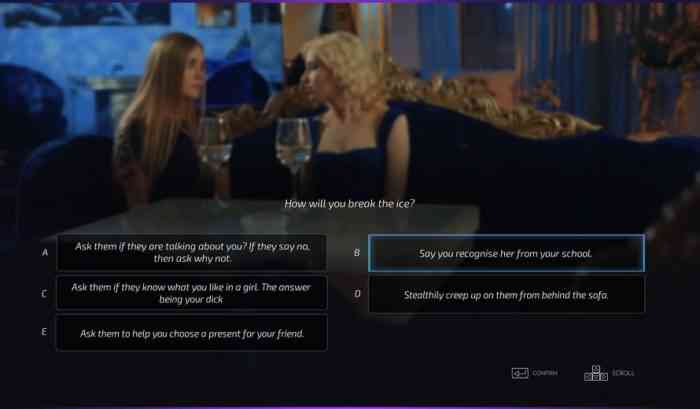 There are reasons that Valve would not certify a game to be released on Steam, but that is what product reviewing is for. You get the yay or nay, and if need be, you fix your game to meet the retail standards or you release it somewhere else. However, it appears that Super Seducer 3 has apparently run out of chances with Steam. La Ruina released an exchange between himself and a Steam representative where he was told that he would no longer be allowed to submit any new builds of the game for approval.

Steam have BANNED and removed Super Seducer 3 from the store. They will not allow it to be released in any form.

Prior to this they told me expect either “approval or feedback”.
We repeatedly said we’d do whatever they needed pic.twitter.com/hVuDcvzL2n

The Steam representative states that “Steam does not ship sexually explicit images of real people.” That’s fair. There are plenty of hentai and sex games out there on Steam that don’t use real images of real people. However, La Ruina responded by saying, “I am willing to take a butcher knife to the game and take weeks to make all kinds of edits.” In essence, he is prepared to do pretty much anything to make the game meet the standards of Steam if given more chances. Still, Steam is not willing to re-review the game or sell it. Super Seducer 1 and 2 are available on PC. Super Seducer 3 is now in limbo.

Do you think Richard La Ruina’s game should be sold on Steam or at least eligible for further review? Let us know in the comments below.