Monster Hunter Stories 2: Wings of Ruin’s release date was revealed earlier today with a sweet new trailer. Now that the game’s launch is on the horizon, Capcom has also revealed the purchase options and the bonus content that comes with it. Right now, it appears that there is only the standard edition and the Deluxe Edition, which comes with exclusive armor sets and cosmetics for supporting characters. There is also Amiibo support for the Nintendo Switch version, but it is unclear what exactly they unlock for players. 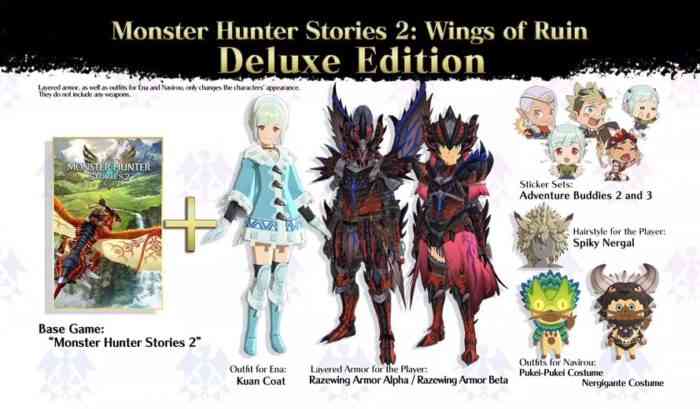 The Deluxe Edition comes with the base game, an alternate wintery outfit for Ena called the Kuan Coat, two sets of armor for the player called Razewing Armor Alpha/Beta, as well as an exclusive hairstyle for the player called Spikey Nergal, which looks like a Super Saiyan Pikachu. It also comes with two alternate outfits for Navirou called Pukei-Pukei Costume and Nergigante Costume, and a set of stickers depicting some of the game’s companions. Pre-ordering any edition of the game will also get players an other alternate costume for Ena called the Kamura Maiden Outfit.

Will you get the Deluxe Edition or pre-order the game? Let us know in the comments below.

Check Out the Guardians of the Galaxy Pre-Order and Deluxe Bonuses
Next
Rust: Console Edition Crafts a Spring Release Date
Previous
League of Legends: Wild Rift Open Beta is Coming to the Americas