The Strongest Saiyan Enters the Brawl in a Brand New Form

Well, it finally happened. Put down that Dragon Ball: Demon Breaker demo and take a look at this. SS4 Gogeta, the closest the Dragon Ball franchise has ever gotten to a true incarnation of Son Wukong the monkey king, is finally coming to Dragon Ball FighterZ, and it is glorious. All Fusions of Goku and Vegeta never fail to impress, but this one is making an especially grand entrance. Hailing from the Dragon Ball GT anime, SS4 Gogeta is mostly known for being one of the only Saiyans to actually have a tail and fur, but he’s also known for being absurdly overpowered even by the standards of this series. Needless to say, we’re looking forward to seeing him go up against the other overpowered Fusions, and it seems that Arc System Works agrees. SS4 Gogeta vs Gogeta Blue is a fight we would pay to see animated. Just look at them!

According to the press release, SS4 Gogeta will specialize in both devastating close combat and long-distance ki attacks, which matches up pretty nicely to his portrayal in the anime. Better yet, Dragon Ball GT’s playful opening theme Dan Dan Kokoro Hikareteku makes an appearance in this trailer with him, bringing a certain nostalgic flavor along with it. Fingers crossed that this song makes it into the full game as well.

He’ll be available for purchase individually or as part of the FighterZ Pass 3 alongside Kefla, Ultra Instinct Goku, Master Roshi, and Super Baby 2, the latter of which also hails from GT. Naturally, he’s shown getting absolutely trashed by SS4 Gogeta in this trailer. Don’t worry, Baby, SS4 Gogeta does that to everyone here, including his own counterpart from Dragon Ball Super–though we think Gogeta Blue is having fun. 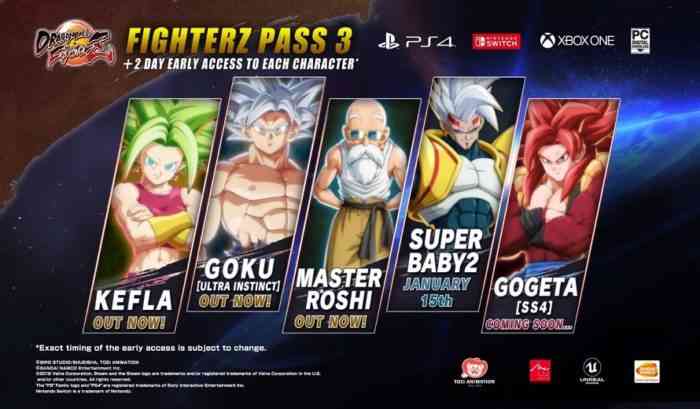 Gogeta will be available on March 12th in Dragon Ball FighterZ with an early access on March 10th for owners of FighterZ Pass 3.

What other DBZ characters would you like to see in FighterZ? Let us know down in the comments, or hit us up on Twitter or Facebook.

Skull and Bones Launch May Have Been Leaked By Xbox Store Listing
Next
Walk the Path Less Traveled in The Fabled Woods This Month
Previous
Is Hogwarts Legacy Doing Enough To Make Up For It’s Creators Mistakes?