Have you ever watched a Jackie Chan film where he starts grabbing ladders, fence posts, and other junk lying around and using it to take down his enemies as stylishly as possible? Did you think ‘man, I wish I could do something like that?‘ Bloodroots is here to grant that wish in the most over-the-top bloody manner possible. In this twisted Western, you’ll take on the role of Mr. Wolf, a man who has been betrayed a gang of bandits and left for dead, and embark on a fun and gory quest to avenge yourself–and find out why you were backstabbed to begin with. It’s a deranged romp through a twisted Weird West setting, where anything can be a weapon and one hit will spell game over. As the game’s official description says, it’s improvise or die. And now you can experience the action on Steam.

If that sounds like a good time to you, then don’t hesitate. Get into the dramatic and deliciously cartoony action now. The sooner you start fighting, the more time you have to try, try again–or should we say die, die again? 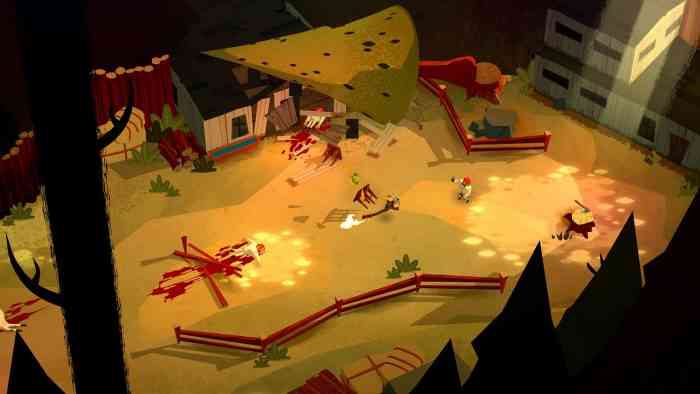 Bloodroots is currently available for Nintendo Switch, PlayStation 4, and PC on Steam and the Epic Games Store.

Are you looking forward to committing murder with a giant fish head? Let us know down in the comments, or hit us up on Twitter or Facebook.

Project Downfall Leaves Early Access With a Major Update
Next
Logitech Accessories and Other Gaming Essentials Are On Offer This Weekend!
Previous
This Week’s Nintendo Download Highlights Crash Bandicoot 4