Step Outside the Security Office

I’ll admit, I’ve only played half of the first Five Nights at Freddy’s game. I like the concept, but my issues are twofold. Number one: I have a thing about animatronics, especially when they’re actively trying to kill me. Number two: I prefer my horror games with more exploration.

Luckily, Security Breach is addressing at least one of my issues, as for the first time in a mainstream Five Nights at Freddy’s game, Security Breach will have a significant exploration component, letting you explore every corner of the Mega Pizza Plex, as if the fact that multiple people have been killed by these animatronics won’t cause a litany of lawsuits. Whether it’s backstage areas, the restaurant floor, the massive play area, or what appear to be subterranean caverns, all the while hunted by a new generation of animatronics who look like they might just be the most agile and dangerous yet. The game’s taking full advantage of the PS5 with gorgeous graphics, beautiful lighting, and the smoothest animations in the franchise so far.

Don’t think that the game is totally abandoning its roots, though; the camera feeds we’ve gotten used to from the majority of games in the series thus far are back, this time viewable on your smartwatch, giving you the chance to check out the area ahead of you. Does that mean you’re safe? No, of course not; a female character says the animatronics will never stop hunting you, while a much deeper, angrier voice promises that two unnamed characters (the security guards?) will burn if they don’t bring him what he wants. It looks like for all the bright and colorful environments, the series is as dark as ever. 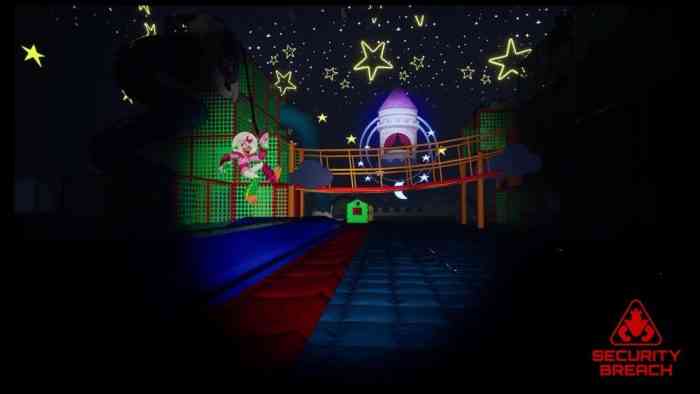