Oddworld: Soulstorm Gets New Footage at PlayStation State of Play

Thought Soulstorm was just another remake? Think again. We already knew about the upgraded graphics and crafting, but if we knew exactly what we were in for, we would have been salivating like a glukkon with a Scrab Cake.

First of all, there’s some big upgrades to the game’s follower mechanic. Fans of the series will know that a big part of gameplay – and something that determines the ending – is attempting to lead your fellow Mudokons to safety. Whereas Abe’s Exoddus featured 278 Mudokons to rescue, Soulstorm is upping the ante with a truly massive number somewhere over a thousand, entire swarms of which can follow you at any time. Even better you can arm them to help you take down your enemies.

We’re also getting a visual upgrade even on the recent Abe’s Oddysee remake, Oddworld: New and Tasty; in what’s being called 2.9D we’re getting almost a whole other dimension, with greater depth on the screen and more dynamic camera angles than in Abe’s previous journeys.

Also new to the franchise is a more dynamic approach to levels. previously the games have had one “correct” way to approach each new situation, but the heightened flexibility here means that you can approach situations in a variety of ways; do you want to arm yourself and your allies and try a brute force approach? Try to take the high road and sneak by? What about taking a trickier approach, sneaking bombs onto your enemies person or setting deadly traps? However you decide to approach things, we’re getting the biggest Oddworld game yet in April – and if you’re a PS5 user, you can get the whole game for free in April – whether as part of PlayStation Plus or the Play at Home initiative – which is dropping Ratchet and Clank next month – remains to be seen. 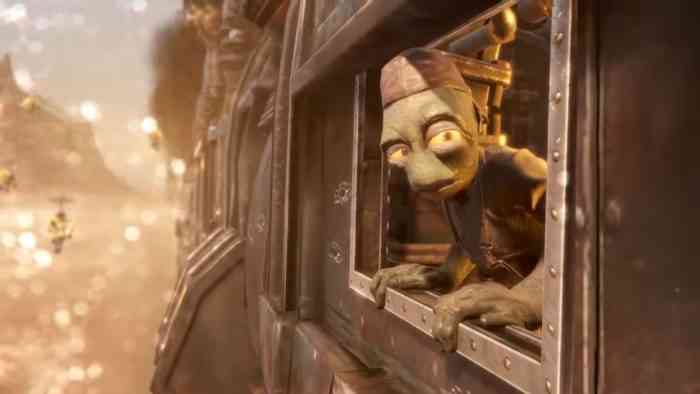 Excited for a trip to Oddworld? Let us know in the comments, on Twitter, or on Facebook.

Oddworld: Soulstorm Heads to Xbox One & Xbox Series X/S
Next
Crash Bandicoot 4: It’s About Time Looks Better Than Ever on PS5
Previous
My Hero One’s Justice 2 Welcomes Tetsutetsu Tetsutetsu to the Brawl