Where We’re Going, You Don’t Need Screens to See

VR, according to my ex, is the future of gaming. Sure, I can see the point; outside of the heightened immersion offered by a VR headset there are the practical implications of not needing a second screen if space is at a premium, but VR is still in the early days where it’s mostly seen as a gimmick. Sure, there are some brilliant VR games, or games that thrive in VR (particularly first-person horror games like Resident Evil 7 or Alien Isolation), but most people still haven’t jumped on board. Could Cosmodread change that? Well, let’s wait and see.

Cosmodread is a roguelike survival horror, putting you on a spacecraft which, surprise surprise, is under attack by… something. Details are scarce, but considering flesh seems to be spreading along the walls like moss in some sections, I doubt it’s some friendly alien who really, really likes salad. The game’s leaning into the immersion offered by VR, requiring you to physically reach out and open doors or cabinets, whether it’s to advance or find vital components to craft items or weapons.

There’s also some nifty shout outs to some horror classics, including an orb enclosed in rings which is an obvious reference to the gravity drive in Event Horizon – one of the most disturbing horror movies of all time which, although it wasn’t a big success when it launched, became a cult hit. Could we be seeing a similar concept? Probably not – Event Horizon already shares a lot with Warhammer 40k, so they may be going in a different direction – but the game looks like a creepy, gruesome experience that horror fans will do well to keep their eyes on. 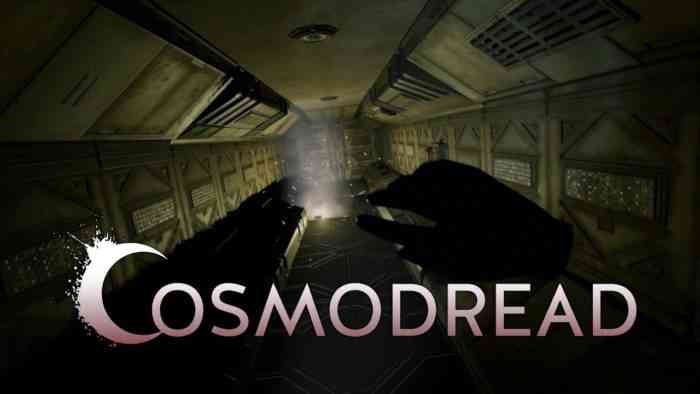 The game drops on March 25th for Oculus Quest and Rift (With cross-buy), and Steam for the HTC Vive, Valve Index, and Windows Mixed Reality Headsets.

What do you think of Cosmodread? Let us know in the comments, on Twitter, or on Facebook.

Cursed to Golf Review – Roguelike 2D Golf for One
Next
Waiting For a Final Fantasy XVI Update? Prepare to Wait a While
Previous
Codemasters Officially Joins the EA Family of Developers