Still Can’t Get an Xbox Series X? Taco Bell Has Your Back

At Least, in Canada

The scarcity of the PS5 and Xbox Series X was one of the weirdest side-effects of 2020. Thanks to raging coronavirus numbers millions of people were unable to secure the latest consoles, while scalpers scooped up thousands and sold them for eye-watering mark-ups. Even two months later it’s still hard to determine when anyone will be able to get one – as soon as stock is made available, they quickly sell out again. 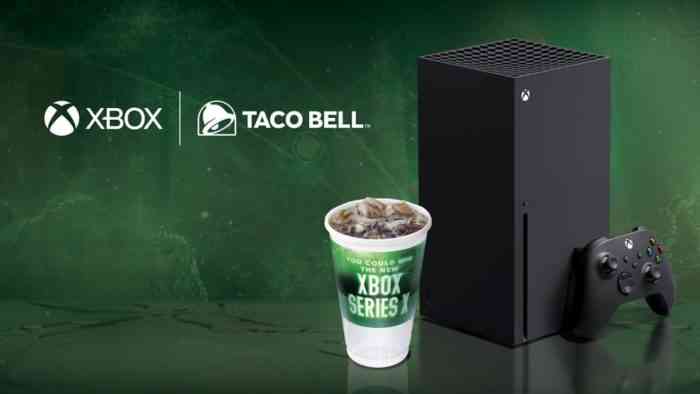 Still, Xbox fans still have reason to hope. Taco Bell, which initially partnered with Xbox to celebrate the original console’s launch all the way back in 2001, and that partnership is still going strong; last year, for the fourth year in a row, the fast-food chain held an Xbox giveaway – this time for a Series X – and now they’re bringing their partnership outside of the USA for the first time, giving players in Canada the chance to get their hand on one of the coveted consoles.

Want to enter? It’s simple – just buy a 20 oz drink from Taco Bell – in-person or on UberEats – and you’ll get a code yosdd can redeem online to be entered into a draw. There’s 165 bundles up for grabs across Canada and you can enter once a day up until February 28th.

“We know our fans crave an exhilarating gaming experience as much as they do our hottest menu items,” says Kat Garcia, Taco Bell Canada’s Director of Brand Marketing. “That’s why we’re thrilled to bring our Xbox partnership to Canada, giving our Canadian fans the chance to get their hands on this highly sought after console.”

The Xbox Series X bundle contains an Xbox Series X console, a new Xbox Wireless Controller and a six-month membership to Xbox Game Pass Ultimate. Not a bad deal for the price of a 20 oz drink.

Are you an Xbox or PlayStation lover? Let us know down in the comments.