Not Sure What Half These Things Do… But They Look Cool

For anyone during the Resident Evil Showcase last night that could tear their gaze from Lady Dimitrescu and imagining her stepping on them, there was quite a lot of information to behold for Resident Evil fans. On top of a new story trailer and gameplay trailer, there is action to take for those who have long been won over by the first looks at Resident Evil Village. The game can now be pre-ordered, so now is the time to choose which edition that you will want to get. 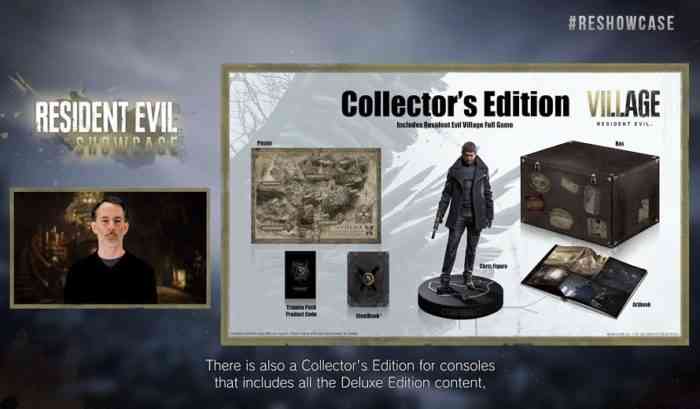 Pre-ordering any edition of Resident Evil Village will get you a couple of in-game items; the Mr. Raccoon Weapon Charm and the Survival Resource Pack, which includes ammo, a lockpick, and some healing items. The Deluxe Edition comes with a bunch of digital content called the Trauma Pack. This comes with the “Max Difficulty”, which piques the interest of some fans. Is the Max difficulty exclusive to holders of the Trauma Pack or will it unlock after a playthrough or two? It also comes with the Albert01 gun, an art collection called The Tragedy of Ethan Winters, Safe Room Music, a Found Footage filter from Resident Evil 7, and Mr. Everywhere, which appears to be a weapon charm like Mr. Raccoon. The Deluxe Edition also comes with a Save Device, which also raises some questions since saving is usually a standard in the most video games.

The Collector’s Edition comes with all of the above, plus some physical items. It comes with a poster, which appears to serve as a sort of map of the area, a steelbook case, a physical artbook, and a statue of Chris Redfield. It all comes in a chest, like what Ethan would store his gear in throughout the game. Resident Evil Village will be out on May 7th for PC, PS4, PS5, Xbox One, and Xbox Series X.

Which edition do you have your eye on? Let us know in the comments below.