Cuteness in Every Medium

Is a JRPG still a JRPG when it’s not made in J? Columbian studio Dreams Uncorporated seeks to answer that question with Cris Tales. The game was first shown off in 2019 at E3 and the PC Gaming Show and was meant to be released last year, but COVID-19 ruined that. There was a demo released in July and fortunately, it is expected to release early this year. If you have played the demo and enjoyed or fell in love with it, you may want to consider getting Cris Tales Collector’s Edition, because you may not get another chance. 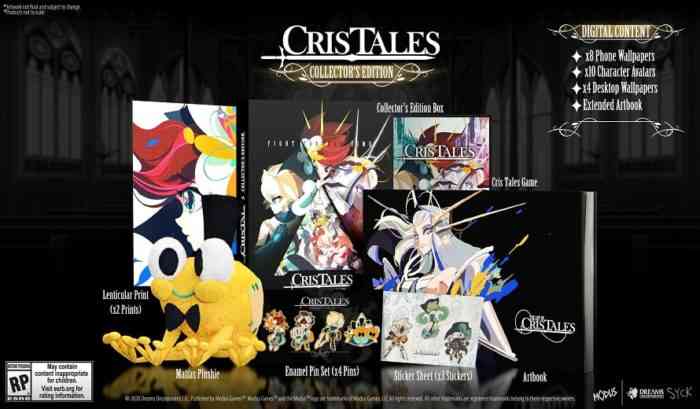 Though without a release date, you can pre-order the Collector’s Edition from Maximum Games Store for any of its supported platforms. It comes with a physical copy of the game (digital code for PC), 2 Lithograph Prints, a 60 page Artbook, 4 Enamel Pins, a sheet of 3 Character Stickers, and a Matias Plushie, which is a frog with a bowtie. All the physical stuff comes in a “Peek-a-boo” Game Sleeve. There is also a bunch of digital content that comes with it, which includes an Extended Digital Artbook, 10 Character Avatars, 4 Desktop Wallpapers, and 8 Phone Wallpapers. A poster comes with all retail copies of the game as well, standard or Collector’s Edition.

This Collector’s Edition costs $100 and only ships within the US, but costumers outside the country can go the extra mile to make other arrangements to get theirs. Again, still no release date, but Cris Tales will be coming out in early 2021 for PC, PS4, PS5, Xbox One, Xbox Series X, and Nintendo Switch.

Will you be getting Cris Tales? Let us know in the comments below.


Get More Out of The Callisto Protocol Collector’s Edition

Eastward Collector’s Edition Comes With Its Own Board Game
Next
Terminator Teased for an Upcoming Fortnite Crossover
Previous
PlayStation 5 + Xbox Series X Restocks Are Here, but Not for Long