It’s been over five years since Batman: Arkham Knight came out. Rocksteady has moved on to making Suicide Squad: Kill the Justice League, but have taken a moment to release some new Batman: Arkham Knight skins. Frankly, I wish they hadn’t. I mean, I’m not going back to the game just to get the skins and they don’t ruin the experience I had with the game, but they just look ugly. They kind of look like when a child draws an animal or monster really badly and a graphic artist faithfully recreates it. 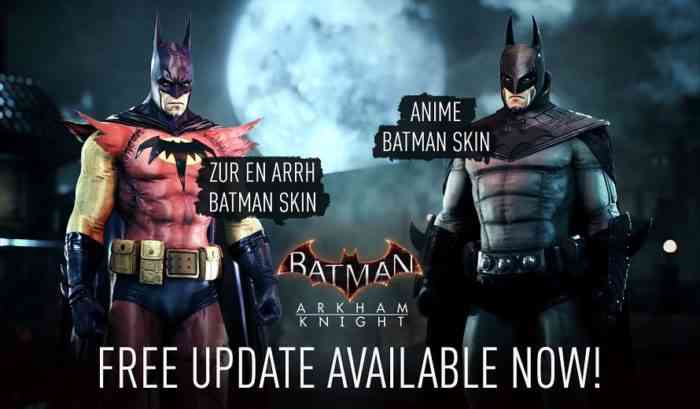 The new skins that Batman unfortunately has are called Zur En Arrh and Anime. The better (?) looking one is the Anime one. Instead of a skintight body suit, for some reason it has pads instead of muscles. It also has an unconventional cowl with no room for Batman to turn his head. It looks something a knight would wear. The Zur En Arrh Batman is a Batman from another planet that watched Earth’s Batman and was inspired by him. He also adopted the colors of Robin for some reason. It’s sewn together really badly, almost like if Scarecrow made the suit.

Players can pick up these skins for free in a new update next time they play the game. It’s Rocksteady’s gift for the holidays. I just wish I could re-gift it. Batman: Arkham Knight is available on PC, PS4, and Xbox One.

Do you think these skins are as ugly as I do or am I being to hard on them? Let us know in the comments below.

Suicide Squad: Kill the Justice League Will Not Be at E3 2021