Laughter is the Best Medicine

Every year, games charity GamesAid holds a live comedy event called ‘Stand Up for GamesAid’. Plenty of great events have been cancelled thanks to the pandemic, but not this one. This year, Stand Up for GamesAid is going digital. On Tuesday, December 15th, the event will be live streamed into your home. The evening will be hosted and MCed by top stand-up comedian Imran Yusuf and will feature the improv crew Shoot From The Hip. All profits will go straight to GamesAid, so get ready to laugh while helping them support charities across the UK that work with children and young people. 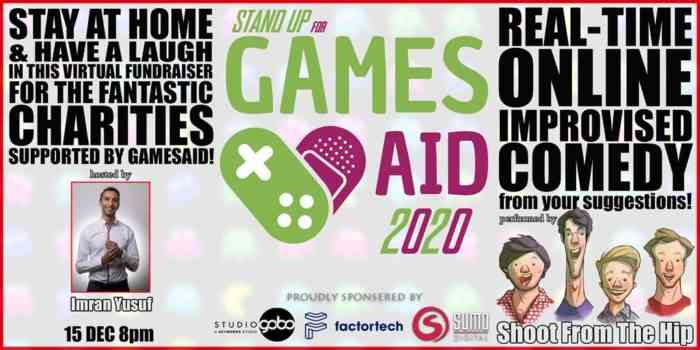 Don’t know who Imran Yusuf is? Here’s a quick bio! Imran is a long-term patron of GamesAid. He’s performed around the world, is an Edinburgh Festival award nominee, and has a reputation as a “warm, punchy and thoroughly charming comedian.” In other words, he’s a pretty great guy. ANd he has experience in the video games industry, having worked for Midway Games, Eidos, SEGA, Kuju and other games companies before he switched to working in comedy. He’ll ever have a stand-up special broadcast on Radio 4 in January 2021. If you’re a patron of the video game arts–or if you just want a good laugh in an increasingly dark time–check his work out.

Don’t recognize the name Shoot From The Hip? Here’s the rundown. They’re one of the UK’s top improvisation comedy groups, which means they shoot with no script and run with audience suggestions. If you’re watching the show, you can give those suggestions! It’s a surreal and hilarious experience you won’t want to miss out on, even if you aren’t into improv comedy. The group has been lauded by Time Out, Metro, and The Evening Standard.

Now that that’s over with, let’s end with the note that Stand Up for GamesAid is being sponsored by world-class, award-winning developer group Sumo Digital, world-renowned developer Studio Gobo, and games financing specialists FactorTech. So yeah, it’s kind of a big deal.

Who’s your favorite comedian? Let us know down in the comments, or hit us up on Twitter or Facebook.


Story of Seasons Publisher Helps Save a Real Endangered Species