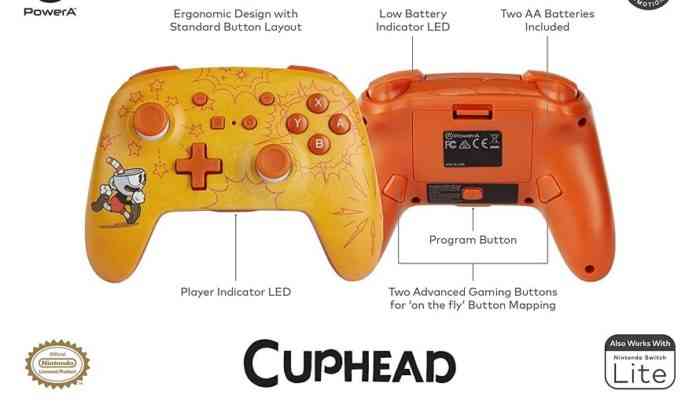 By the way, this is specifically a Cuphead controller. By that, I mean only Cuphead is on it, not his Luigi-brother Mugman. Mugman would totally be on a Madcatz controller. This Cuphead controller has a yellow face with the titular character on one side and various impact graphics inspired by the game around the buttons. The back of the controller is entirely orange, but who looks at the back anyway? What’s important are the features. The underside of the controller has two mappable buttons for your gaming convenience. It also supports motion controls, but no rumble feature.

As mentioned above, PowerA has a deep collection of Nintendo Switch controllers. They are designed after the Super Mario, The Legend of Zelda, and Pokémon brands. Now Cuphead is joining their ranks. The controller will be available on December 15th, but it is unclear if it will ship in time for Christmas, if you’re thinking of getting it as a gift. Cuphead is available on PC, Xbox One, PS4, and Nintendo Switch.

Does this Cuphead controller catch your eye? Let us know in the comments below.