Shun’ei is There, But More Importantly, Kyo Got His Headband Back

It’s been a while since we got to talk about this franchise–and no, mobile games don’t count. SNK has finally taken pity on us and a new KOF game is on the horizon. The King of Fighters XV is still quite a ways out, of course, but the first teaser trailer still gives us plenty to work with, beginning with a sneak peek at the reworked character designs for Kyo Kusanagi, Benimaru, and Shun’ei. Kyo is getting back to basics with a sleek black jacket that reminds us of his NESTS Saga design, for better or worse, but his trademark headband has made a reappearance. The whole look is very classic KOF. Now we can’t help but wonder what they’ll do with Iori, whose design has always reflected and contrasted his rival’s. Benimaru is also looking sharp in a Chinese fashion-inspired sleeveless top and lightning bolt earrings. We hope someone makes real version of those earrings, they’re nice.

But enough talk about the best characters in the series. It’s time to discuss the new game’s protagonist: Shun’ei. That’s right, after an uncertain start in KOF XIV, Shun’ei is back and will officially be taking the central role. We wish him luck, and also that he learns to put his arms through his sleeves. He’s not a Disgaea character. KOF XV Producer Yasuyuki Oda and Creative Director Eisuke Ogura claim he’ll be much cooler in the new game, but we’ll have to wait and see.

Speaking of Oda and Ogura, they also have something interesting to say about the game mechanics–namely, how teams will function. “The way teams are composed [in KOF XV] will differ greatly from XIV,” Ogura states. “But more information will come out periodically next year so, in the meantime, fire up those dream rosters!”

Both men also say that KOF XV is the “most ambitious KOF yet”, which is high praise considering that KOF was the first fighting game to take full advantage of story mode to craft a truly compelling narrative. There are many reasons KOF is still in the game all these years later, and its genuinely enjoyable characters and surprisingly solid drama are just two of them. 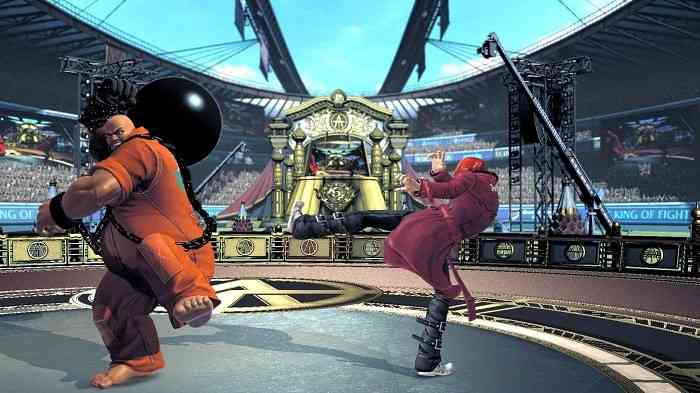 If you’re interested in seeing where KOF is going next, the official trailer for The King of Fighters XV will drop on Thursday, January 7th, 2021. Tune into SNK’s official YouTube channel the day of for details. We’ll see you there.

What’s your favorite fighting game? Let us know down in the comments, or hit us up on Twitter or Facebook.

MultiVersus Pops Off, Beta Launch is an Incredible Success
Next
Medal of Honor: Above and Beyond Gets Multiplayer Reveal
Previous
Story of Seasons: Pioneers of Olive Town Premium Edition Details