VR technology is a constantly expanding field, but one area which hasn’t seen a lot of development is, well, walking. Hear us out. You can move around in VR, sure, but you always risk bumping into something, or worse, someone. Hurting yourself is always on the table. Multiplayer is an exercise in trying not to hit each other. Why hasn’t someone tried to fix this? The answer is that someone has. Cybershoes are a VR accessory designed to track the movement of your feet, so you can do all kinds of crazy stuff while seated safely in a chair. These shoes might look like a crocs’ more embarrassing little brother, but you can’t argue with results.

Over 3,000 pairs of Cybershoes have been shipped for use with SteamVR wired headsets, and now the team is looking to branch out into making shoes for the Oculus Quest. As of writing, the Kickstarter has raised almost twice the necessary funds, so there’s definitely a demand. The original design was honored earlier this year in the CES Innovation Awards. We’re definitely looking forward to what comes out of this Kickstarter. Cybershoes for Quest will connect wirelessly via the CyQuest Bluetooth receiver. Then you’ll be easily able to move around the digital plane. The plan is to offer native integration in at least six titles, including Onward, Rec Room, VR Chat, though other titles have been tested and found to work well with Cybershoes.

Cybershoes for Quest will feature: 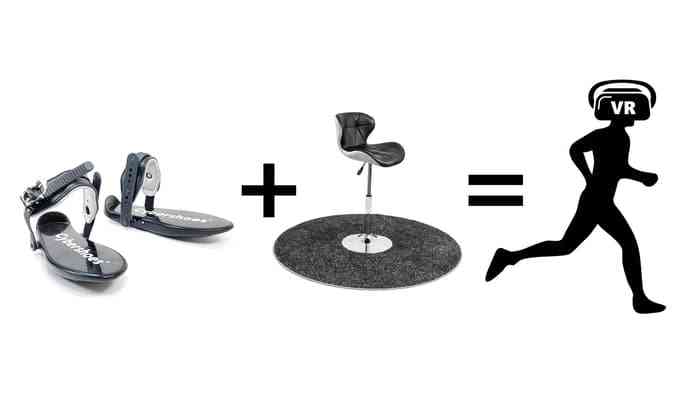 Well, that sounds pretty great to us! Any VR gamer should give these a shot. Even if they do look a little goofy.

What’s the weirdest problem you’ve encountered in the real world while trying to play VR games? Let us know down in the comments, or hit us up on Twitter or Facebook.