We have all wanted to live in a video game at one point or another, and soon we will continue not actually doing that, but we will get the next best thing when Super Nintendo World opens in February. Well, WE won’t. It seems that Japan always gets first dibs on the coolest stuff. Universal Studios Japan just released a first look at Super Nintendo World with a small teaser. 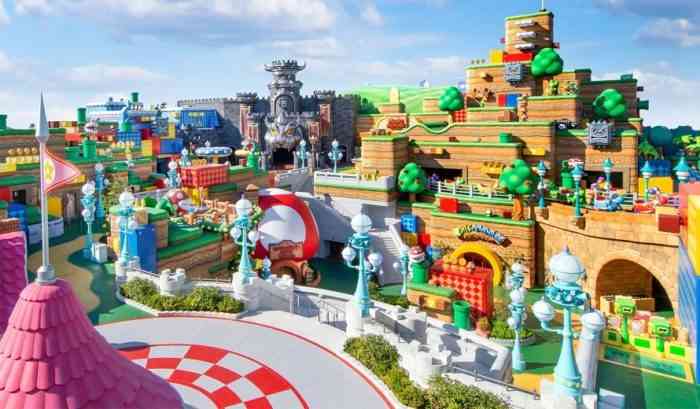 It mostly looks like a theme park built in a Mario game, but that also kind of lends to the magic of it. The CGI shows us classic Mario enemies like Goombas walking around and spinning coins. We also see a CGI look at Mario Kart: Koopa’s Challenge which appears to be a Bowser’s Castle area. The only actual real footage we see is of the Mario Kart attraction. Each Kart holds up to four people and look like they are modelled after bumper cars. It’s kind of unclear what the Mario Kart attraction will actually be though. The description of it says “Based on in-house research of facilities featuring the world of Mario Kart, theme park original attractions and the games,” and I have no idea what that means.

Eagle-eyed viewers of the teaser will be able to see a Yoshi’s Adventure attraction and a POW Factory, but it is unclear what those would be, if the CGI rendering of the park is accurate to what guests will actually see. Obviously, Nintendo probably would have liked to call this Super Mario World, but settled for Super Nintendo World. Right now, we are really only seeing Mario attractions, but if it’s called Super Nintendo World, this opens the door for Nintendo to add other areas or attractions for other Nintendo properties like The Legend of Zelda or Donkey Kong. That would be a wonderful treat! Super Nintendo World opens on Febrauary 4th, 2021.

What else would you like to see at Super Nintendo World? Let us know in the comments below.