Battle at the Gates

Aw man. New eras are popping up all over the place. We got new leadership in the States and, perhaps just as important, a new Season of Tekken 7 is beginning next week. Joe Biden is returning to the White House and Kunimitsu is returning to the Tekken series. Tekken 7 Season Pass 4 was announced in August, but until now we have been waiting on a release date. Turns out, the wait is nearly over. Starting this Tuesday, fans will be able to purchase Season Pass 4 and play as Kunimitsu in her signature stage Vermillion Gates. 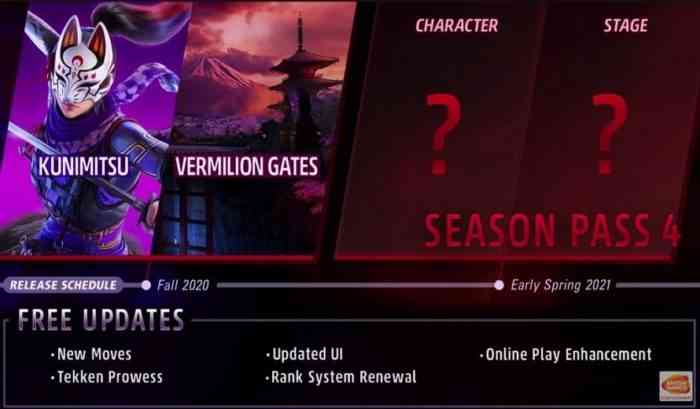 The foxy fox ninja Kunimitsu has not appeared in the series since 1995’s Tekken 2. Her accompanying stage Vermillion Gates is set in a mountainside temple in Japan surrounded by dozens of cherry blossom trees, which might be the most Japanese location ever. In Season 4, there will also be a balance overhaul and new moves added to each character. For a limited time, there will also be a Pac Man stage in celebration of the 40th anniversary of Pac Man, so players should waka-waka while they can.

The battle’s not over yet. Season 4 of #TEKKEN 7 begins on November 10th!

Kunimitsu is not the only major addition to Tekken 7 this season. In “early Spring 2021” a new character and new stage will be announced. Will they be a brand new character to the series? Or will they be a returning classic like Kunimitsu? We will have to wait three or four months to find out. Tekken 7 is available now on PC, PS4, and Xbox One.

Will you be picking up Season Pass 4? What new character do you think will be revealed? Let us know in the comments below.

Gears 5: Hivebusters Review – Fire Up That Lancer One More Time
Next
Marvel’s Avengers Has Been Awful for Square Enix
Previous
Genie Bouchard’s Mortal Kombat Cosplay Almost Blew Up The Internet