Saber Interactive and Focus Home Interactive are at the helm of SnowRunner, an off-road vehicle navigation and delivery simulator. It’s like that Ice Road Truckers show, but without the up-my-own-ass attitude and reality TV-made self-importance. SnowRunner creates a world where the player needs to get from point A to point B, and there isn’t always an easy road in between, but you need to conquer it regardless. You can use many different vehicles and real-life brands of vehicles along the way, and expand the range of what you can use. SnowRunner Season 2 kicks off with the Explore and Expand DLC, which is aptly titled. 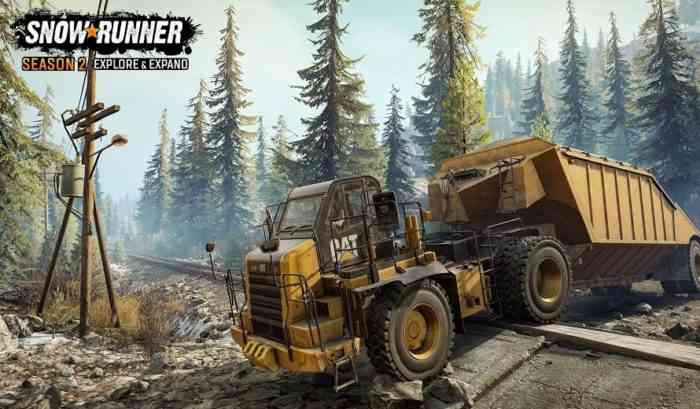 Explore and Expand takes players to the Yukon Territories in Canada. Go, Team Canada! even if it’s the part of Canada no one wants to go! This DLC apparently makes the large play area of SnowRunner even bigger, by about 50%. In Explore and Expand, you will be doing just that; finding new places and sites, then building new factories and industrial locations. Three new vehicles will be available to help you do that, including the CAT TH375D AG (kind of like a forklift), CAT 770G (now the biggest truck in the game), and the KRS 58 Bandit (an 8×8 truck with a built-in crane for transferring cargo).

Along with the Explore and Expand DLC, there will be a free content update, which adds some much-desired features, such as multi-vehicle transportation. This will allow players to pack up a bunch of trucks and haul them long distances. It also adds bonus trials and activities, as well as vehicle interior customization, so you can get neat little bobbleheads and air fresheners for those long drives. Season 2 of SnowRunner has begun today with Explore and Expand. SnowRunner is available for PC, PS4, and Xbox One.

Are you in for the long haul with SnowRunner? Let us know in the comments below.