A Sack Full of Goodies

The unfortunately named Sackboy is getting his own game. Again? Sort of again. Sackboy: A Big Adventure is and isn’t LittleBigPlanet. We see a lot of elements in play from LittleBigPlanet in this game, but it appears that Sumo Digital will mainly focus on telling a story rather than having players build the game for them. In previous LittleBigPlanet games, players could dress up Sackboy in costumes in the games or they could download costumes, some of which borrowed from other franchise. Players who get Sackboy: A Big Adventure Special Edition can get exclusive costumes from more current PlayStation franchises. 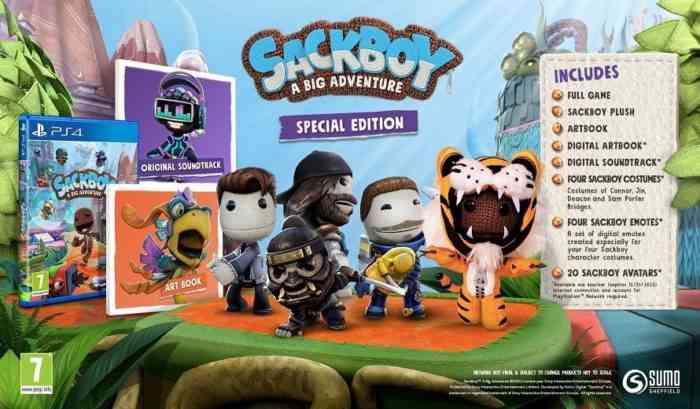 It’s been about six years since a LittleBigPlanet game came out on consoles and in that time, we have had a bunch of insanely successful PlayStation games. Players who procure the Special Edition of Sackboy: A Big Adventure can get costumes of Deacon from Days Gone, Connor from Detroit: Become Human, Sam Porter Bridges from Death Stranding, and Jin from Ghosts of Tsushima. Digital content also includes an art book, the soundtrack, four Sackboy emotes, and twenty Sackboy avatars. In terms of physical items, you can get a physical art book and a Sackboy plushie.

Past Sackboy costumes have borrowed from other series like Assassin’s Creed, Mortal Kombat, God of War, Sonic the Hedgehog, various Marvel comics, Final Fantasy, Uncharted, Jak & Daxter, and Ratchet & Clank. With many of those franchises still trucking along, we will see if any of those costumes make their way into Sackboy: A Big Adventure, which launches on PS5 on November 19th and PS4 on November 12th.

Which edition of Sackboy: A Big Adventure will you get? Let us know in the comments below.

Counting Down The Best Video Game Characters of 2020