During a recent PlayStation Blog, Lucid Games Community Manager George Rule gave PlayStation fans an idea of what to expect from their next-gen game: Destruction AllStars. The game will launch with four game modes: Mayhem, Carnado, Stockpile, and Gridfall. A challenge series will also let gamers unlock exclusive Character and Player Cosmetics through a curated series of challenging events against the AI. Destruction AllStars is releasing exclusively for the PS5 and PS5 Digital Edition in February 2021, and it will be free through PlayStation Plus when it releases. 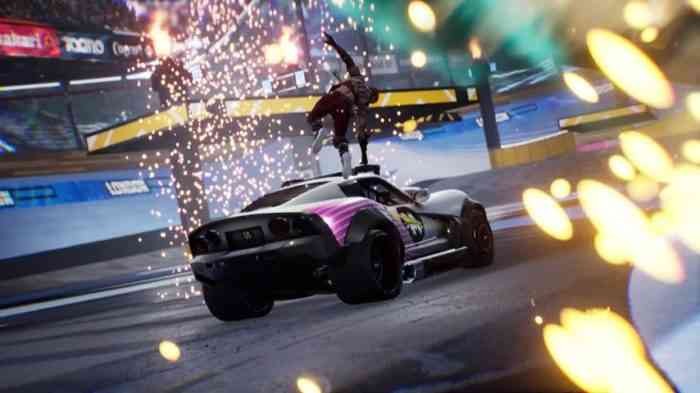 While Destruction AllStars will launch with four game modes, Lucid Games intends on adding to the game and evolving it over time. The new content will range from new seasons, new AllStars, challenges, and game modes. Cosmetics are a clear focus with Destruction AllStars and the progression is focused on customizing your ideal racer. “The team will be closely monitoring community discussion and engaging with players to integrate player feedback through regular updates,” said George Rule.

According to George Rule, Mayhem will have the classic Deathmatch feel that’s focused on dealing damage to win. Carnado is playable both solo and in teams and gamers will have to focus on collecting and storing points in their vehicles in order to sacrifice them to the titular Carnado located in the arena. Stockpile is a capture and control based game mode that tasks gamers with collecting and returning Gears to banks located around the map. Finally, Gridfall is a one-versus-all 16 player battle royale where competitors are slowly eliminated to determine the very best among them.

Which of the four games launching with Destruction AllStars are you most intrigued by? Let us know in the comments below!