Next week is launch week for Xbox Series X. Many fans will be getting their first next gen console on November 10th, but why get a regular Xbox Series X when you could get one that resembles Claptrap? You know, that thing you most want to kick? The thing that never shuts up? The thing that screws everything up? Okay, maybe that isn’t what you want in a console, but hopefully this Borderlands 3 Xbox Series X that 2K is giving away doesn’t inherit those qualities. 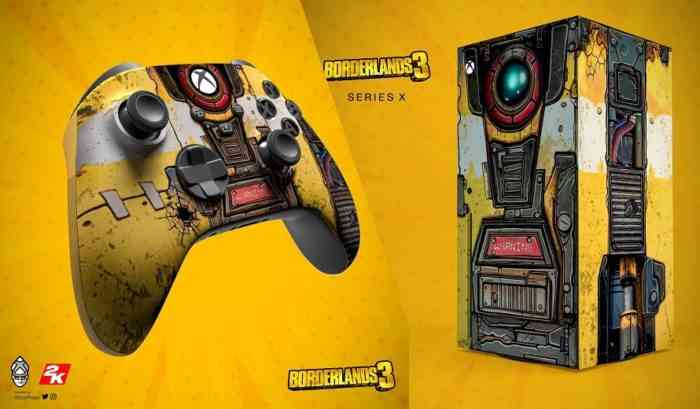 Through a partnership with Xbox Pope, 2K is beginning a giveaway/contest on November 9th for a Claptrap Xbox Series X. It looks kind of the way you expect; like Claptrap, the way he pulls in his arms and wheel when he’s scared. The accompanying controller is also styled like Claptrap. The face of the controller has the Hyperion paint job, but appears to have some missing panels, as well as a bullet hole from when Handsome Jack shot him at the end of Borderlands: The Pre-Sequel. This console is a one of a kind, just like Claptrap. I mean there were other Claptrap units at one point and some of them may have lived to be less annoying than the one we know, but… There’s only one of these.

The contest for this Xbox Series X begins on November 9th, but that is also when the contest details and rules come out. There is currently no information about what this contest entails other than hints that contestants should be prepared to get creative. Xbox Pope is a UK-based custom console designer and is partnered with 2K UK, so that might affect who is eligible to enter. Borderlands 3 is available now for PC, Stadia, Xbox One, and PS4, and will be available on PS5 and Xbox Series X when they launch.

Will you enter to try for this custom console? Let us know in the comments below.