K/DA exploded onto the music scene in 2018 – an impressive feat for a band composed entirely of video game characters – and now they’re making a comeback with a brand new EP and new skins to match. Riot Games assembled League of Legends stars Ahri, Evelynn, Kai’sa, and Akali into a formidable girl group for a jaw-dropping music video. Yeah, it was basically just a big ad for new skins, but those skins were awesome. Akali’s neon demon paint still gets to me. After their first single, Pop/Stars, became a viral hit, the group went on to produce a second single – The Baddest – and Akali also appeared in Riot’s equally virtual hip-hop group True Damage, rapping in their song GIANTS. Now K/DA is about to return with their first EP, All Out, which will be available on November 6th.

What does this mean? Well, first of all, it means new songs, but it also means new in-game skins for the girls. They’re all sporting new looks in their twitter promos, this time leaning into sleek leggings and a blue-black colour scheme. Evelynn and Ahri sport long pastel hair and garters, while Akali and Kai’sa show off elbow gloves and fishnets. Akali’s painted fangs are nowhere to be found, sadly, but Ahri’s crystalline tail is still proudly visible, so maybe we’re not completely out of luck. Either way, all four of them are absolutely dressed to pentakill. Rumour has it that All Out may even feature an appearance by new champion Seraphine, just like GIANTS showcased Senna.

Pop/Stars has gathered over 300 million views on Riot’s official YouTube channel since being uploaded 2 years ago and The Baddest has already gathered 22 million since August 2020, so it’s clear that K/DA is going places. I for one can’t wait to see what these girls – and the talented people behind them – give us next. 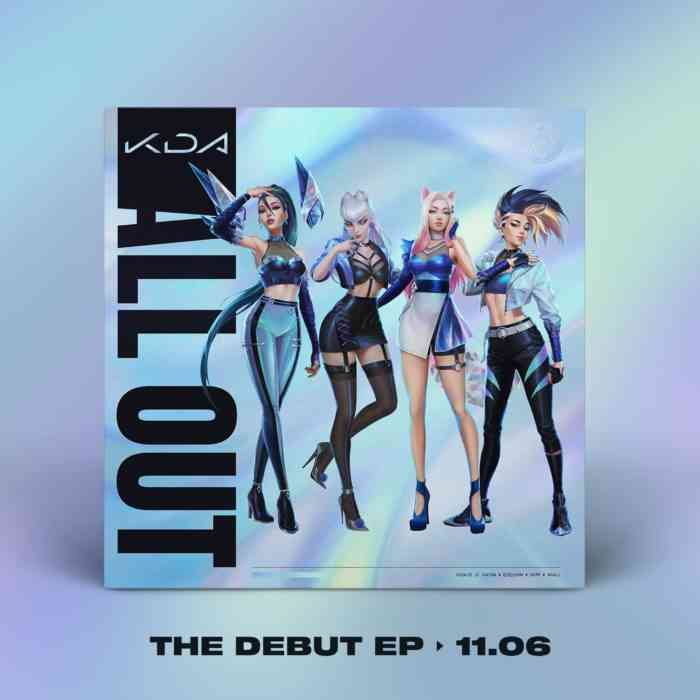 Who’s your favourite LoL Pop Star and why is it Akali? Let us know how hyped you are down in the comments, or hit us up on Twitter or Facebook.


No, LoL’s Seraphine Isn’t Based on an Ex-GF

The Riveting and Revealing Cosplay of Rinnie Riot

A New League of Legends RPG is On The Way