Can you believe it? The Fire Emblem series is 30 years old. And what do we do when we turn 30? We make ourselves new again by releasing ourselves to the world outside of Japan! At least that’s what Fire Emblem is doing. Originally released in 1990, Fire Emblem: Shadow Dragon and the Blade of Light was the first of the series and was only available in Japan. The central character was Marth, who many of us know from being the Super Smash Bros. Melee guy. No need to actually bust out your NES though. It will be available on Nintendo Switch. 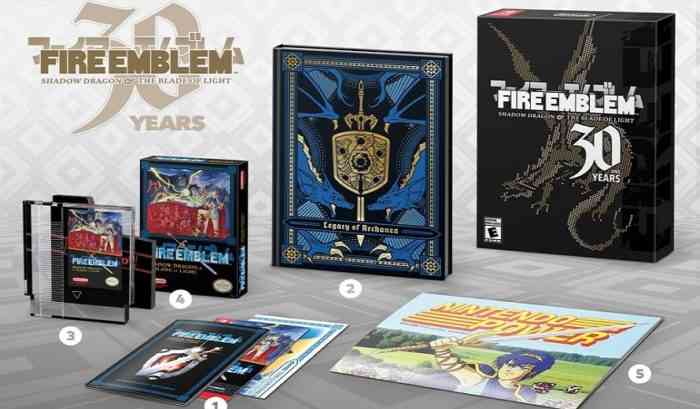 There are a couple of options for purchasing this game. There is just downloading the standard game, which costs just $5.99. However, the hardest of core fans might want to get their hands on the 30th Anniversary Edition, which is a collector’s edition. The 30th Anniversary Edition comes with a code for a digital copy of the game, a deluxe artbook called Legend of Archanea, a replica game cartridge with the classic Nintendo game sleeve, a replica game box with an instruction booklet and world map, a Mini Nintendo Power collectible. All of this comes in a special 30th Anniversary box.

Shadow Dragon and the Blade of Light was actually remade in 2008 for Nintendo DS, but what is coming out for the Switch will be the OG Fire Emblem. For some reason, like a couple of newer Nintendo releases like Super Mario Bros. 35 and Super Mario 3D All-Stars Trilogy, Fire Emblem: Shadow Dragon and the Blade of Light will only be available for a limited time. Both the standard edition and 30th Anniversary Edition will be available on December 4th for Nintendo Switch.

Will you be picking up Shadow Dragon and the Blade of Light? Let us know in the comments below.

See More Than Ever in the Metroid Dread Overview Trailer
Next
Stormzy Drops New Music Video to Promote Watch Dogs: Legion
Previous
Here Are 12 Fantastic Video Game Titles to Add to Your Library for Cheap This Weekend