InnerSloth Says There Are Cheaters Among Us

In Space, No One Can Hear You Break the Game

2018’s Among Us is this summer’s self-isolation hit, so much so that developers InnerSloth canceled their recently-announced sequel to work on refining the existing game. They’ve got their work cut out for them if this report is anything to go by. You might think that there’s not much point in cheating at a party game, where the goal is less about victory and more about who can yell at your friends the loudest, and you’d be right. But when has that ever stopped anyone from doing the wrong thing? People cheat at Fall Guys. Among Us becoming a target was inevitable.

There are two main brands of cheating being reported on Reddit and Twitter: information leaks and straight-up hacking. That first one is both the hardest and easiest to deal with: if someone in your friend group is snitching about the identity of the imposters, you can ban them from your chat, but if you’re playing online then you’re out of luck. The hacking is even more difficult to deal with. How are you supposed to have fun when someone instakills every player? Even less devastating mods like speed cheats can render Among Us unplayable. InnerSloth is doing its best to address the problems, but it’s a tiny company made up of only three people, and Among Us has already reached a point of no return. Programmer and business lead Forest Willard told Kotaku that it was “really difficult to make a change that doesn’t break the game or cause bugs or something like that.”

What awaits the game that’s brought joy and laughter to so many? Among Us is still doing amazingly well. Right now it’s the top free app on the Apple app store and the number one game on Google Play’s trending list. InnerSloth is working hard to set up an account system, improve moderating and reporting, and make the servers better at detecting hacks. With luck, Among Us will remain a source of peace and happiness in a sea of chaos. Otherwise, players may be forced to take justice into their own hands. 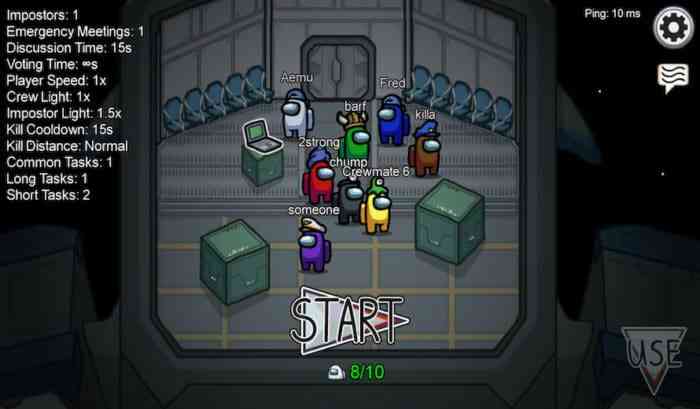 What’s the weirdest thing you’ve seen in a round of Among Us? Let us know down in the comments, or hit us up on Twitter or Facebook.