With the official release date, pricing, and pre-order of the PS5 going live, fans are obviously going to set their sights on the games to play on it. One of the PS4’s biggest games Spider-Man has its spin-off game coming out on PS5, so let’s get into what will be coming with that. Spider-Man: Miles Morales will be available on PS4, but there are also some options for PS5. There is the Spider-Man: Miles Morales Ultimate Launch Edition and Launch Edition. Getting either will come with codes for some extra things. 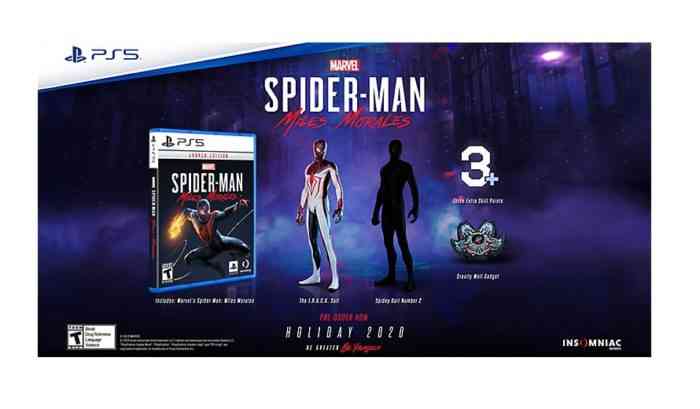 The Launch Edition, which is kind of like the standard edition between the two, is described on retail sites, but a leaked image shows the contents. It comes with two alternative suits to Miles’ classic red and black. The first is the T.R.A.C.K. Suit, which stands for Time Response Activated Circuit Kinetic. The second is blacked out and not yet revealed. It also comes with three extra skill points available for quick spending. The Launch Edition also gives quick access to the Gravity Well device, which can be used to knock down and disarm enemies. The Gravity Well is a gadget that will be unlocked through story progression even if you do not own the Launch Edition.

The Ultimate Launch Edition comes with all the above bonuses, plus a little something else: Spider-Man Remastered. It was rumored a few months back that the Miles Morales game might come with Spider-Man and it is kind of true. Spider-Man: Miles Morales will be coming out on November 12th for PS4 and PS5.

Which edition will you be getting? Let us know in the comments below.