Bug Fixes Is Half the Battle

Last week, Bethesda previewed some content for Fallout 76 Season 2. Season 1 AKA The Legendary Run will be ending next week, so all the unclaimed rewards will dry up and go away. To help get players to the end of the rewards, Bethesda is activating a Double S.C.O.R.E. event which started on September 1st and will last until September 8th, when the season ends. Judging from what we have seen from Season 2, it appears that the rewards will offer a ton of fun activities for Vault Dwellers to do in their downtime. 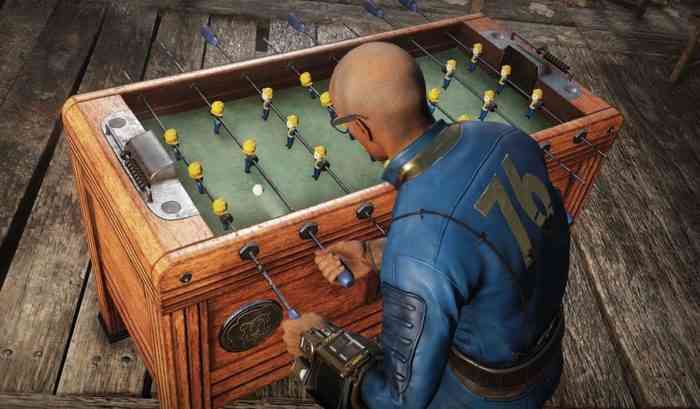 Like Season 1, this season will be offering mainly cosmetic items and decorative pieces for you home bases. Although last season did give players an ammo conversion tool, there will not be any major game-changer weapons or items. Even though Armor Ace and the Power Patrol (which is what Bethesda is calling this season) will has a pungent Americana theme, the rewards shown in the preview do not really reflect that. We see a lot of different cosmetics like Chinese army outfits and paints, as well as a sort of nuclear casino themed paint job. As far as objects and interactive furniture for camps, there are some cool things like a bench press, a Vault Tec Foosball table, and an arcade firing range like what you would find at a carnival or fair.

There are many more things to unlock, but you can see them when the season launches on September 15th. Unfortunately, players should brace themselves for some bugs and overall technical missteps for Season 2. There is no glaring reason for that other than that this is Fallout 76 we’re talking about and pretty much every major update or release has been significantly flawed. Fallout 76 is available for PC, Xbox One, and PS4.

Will you be playing Armor Ace and the Power Patrol when it comes out? Let us know in the comments below.