At EVO 2019, Guilty Gear Strive was officially revealed. At the time, the release window was set for 2020, but due to the global pandemic, the game has been pushed back to a 2021 release. However, that won’t stop Arc System Works for long. Late last week, they released a twofer character trailer, as well as confirmed a Steam and PS5 release. The Guilty Gear series is not just known for its classic 2D fighting gameplay style, but for its awesome power metal soundtracks, which do not disappoint in these trailers. 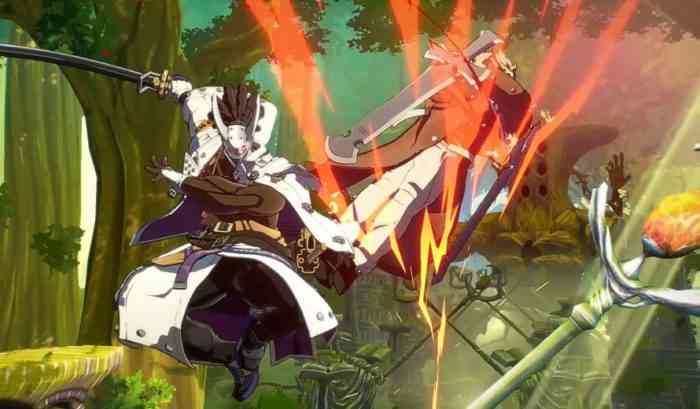 Two characters were revealed: Leo Whitefang and Nagoriyuki. Leo Whitefang was introduced to the series in Guilty Gear Xrd SIGN and is one of the three allied kings of Illyria. He wields two greatswords that are shaped like crosses. As king, he is able to redefine words as he sees fit. In fact, he is writing his own dictionary, which he can be seen working on in the trailer. Guilty Gear Strive will be Leo Whitefang’s fourth appearance in the series. As Leo’s trailer ends, a countdown until the next trailer, which is normally measured in months, counts down by seconds. A brand new character Nagoriyuki is joining the game’s roster. This guy is three awesome things in one. He’s a samurai, he’s a got a sweet techno-helmet, and he’s a vampire. We can see him sucking blood directly from his opponents at times and he also wields a blood-sucking blade. This is his first appearance in the Guilty Gear franchise.

As the character trailers close, the list of supported platforms have the PS5 logo added, and is also confirmed by Arc System Works to be coming to Steam. Guilty Gear Strive will be coming out in Spring 2021 for PS4, PS5, and PC.

Which character are you most excited to play as? Let us know in the comments below.