Horror is one of my favorite genres. Whether it’s movies, games, books, or TV series, nothing gets me as excited as something scary, but Devolver Digital have a history of doing things differently and their new game, Carrion, styled as a reverse horror, flips the genre on its head. 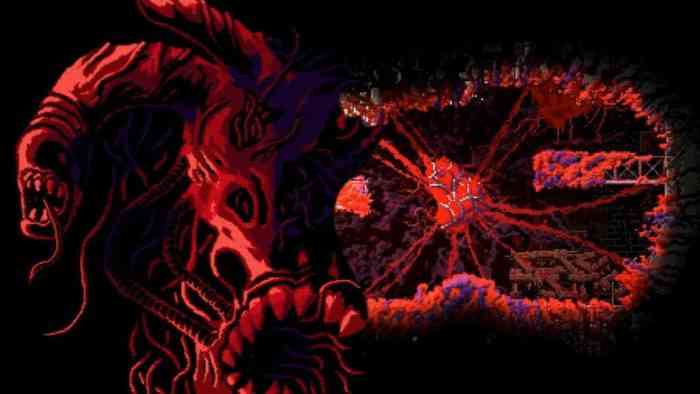 Sure, other horror games have let you play the killer, from Dead by Daylight to Alien vs. Predator to Friday the 13th, but this game puts the protagonist role solely on the monster’s shoulders, and the enemies are the staff of a facility that’s kept it imprisoned. Now, it’s time to break out.

In the trailer, a man in a trenchcoat makes his way through the facility as CCTV footage from around the lab shows the guards fighting- and being killed by- the monster. He makes his way past mutilated corpses and eventually comes to a safe room where others are hiding. Their relief at seeing him is shortlived, however, as the creature burst from his body and lunges at them.

The trailer is animated, so sadly there’s no in-game footage, but if the game is as gory as the trailer makes it look then it’s bound to be interesting. There’s some heavy The Thing vibes which, despite a video game being based on the horror classic, have been missing from a lot of games.

The game launches on July 23rd on Steam, Nintendo Switch, and Xbox One. The game is in 2D and the creature’s agility, strength, and tentacles mean that you’re never in fear of going hungry; whether you’re tearing through barriers, squeezing through vents, or ensnaring your next snack with your tentacles and drawing them close, you’ll show everyone who dared imprison you just how big of a mistake they made.

What do you think of the new game? Hit us up on Twitter, Facebook, or in the comments section down below. We’re not tentacle monsters looking for our next victims. I promise.

The Tower: To The Bottom Will Launch on PC Sometime This Fall
Next
Yakuza: Like a Dragon Drops a New Trailer
Previous
Destiny 2 Grandmaster Nightfalls Update, Falling Guillotine Sees Change