In Futuristic PS5 & PC Game, Stray, You Are A Cat

We’re Feline Good About This One

At Sony’s PS5 reveal event today, French indie studio BlueTwelve unveiled the teaser trailer for their in-development game, Stray. We don’t know much about the gameplay yet, but it caught our attention because it lets you play as a cat.

In Stray, you are a cat, wandering a futuristic city populated only by (likely sentient) robots. These robots wear clothes, chat with each other at their local convenience store, and even paint graffiti — they are human in everything but flesh. On the other hand, humankind is, quite literally, out of the neon-lit picture.

Here’s the trailer from the showcase today:

In a Playstation.Blog article, BlueTwelve’s Creative and Game Director Viv said that the setting was inspired by the historic Kowloon Walled City in Hong Kong. The game was initially conceived by co-founders (and former Ubisoft employees) Viv and Koola, under the placeholder HK_Project, and is still in early development. So far, Stray is set to be published by Annapurrna Interactive for PlayStation 5 and PC (via Steam) sometime in 2021.

Regarding the unconventional decision to have the player experience the game world through the eyes of a cat, Viv said: “We are inspired everyday by Murtaugh and Riggs, our two cats. Most of the team are cat owners as well, giving us all a lot of helpful first-hand references. Cats are always so playful, cute and lovingly annoying that it’s an endless stream of gameplay ideas for us.” 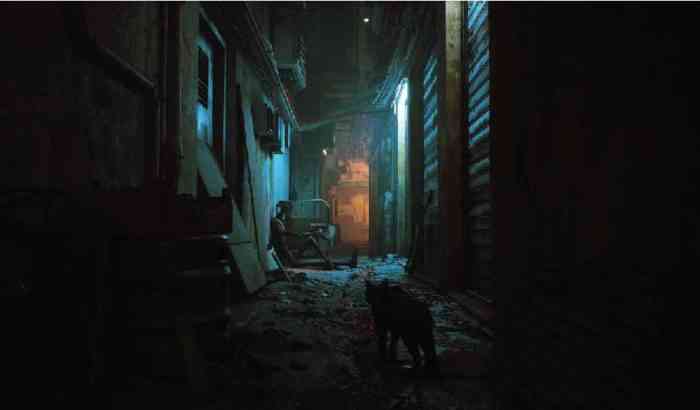 BlueTwelve plans to include exploration and puzzle elements as well as fast-paced action (not shown in the trailer) in the final gameplay.

Viv further elaborated: “Exploring the strange world we are building feels really fresh when you’re sneaking under a car, or walking the rooftops with the inhabitants below unaware of your presence. Or if you want them to be aware, you can just meow endlessly to annoy them.”