The Walking Dead: Saints and Sinners Meatgrinder Update Coming Out

It wouldn’t be a zombie apocalypse if you couldn’t fight endless waves of the undead. While The Walking Dead may be a drama with the backdrop of a zombie/horror world, even they have to have some good old fashion zombie-killing arcade mode. That is what The Walking Dead: Saints and Sinners Meatgrinder Update is all about. Earlier this week, Skydance Interactive released a trailer for this update which puts the player in a classic horror location; a cemetery. In this cemetery, the player will have to fight off waves of walkers until they can no longer. 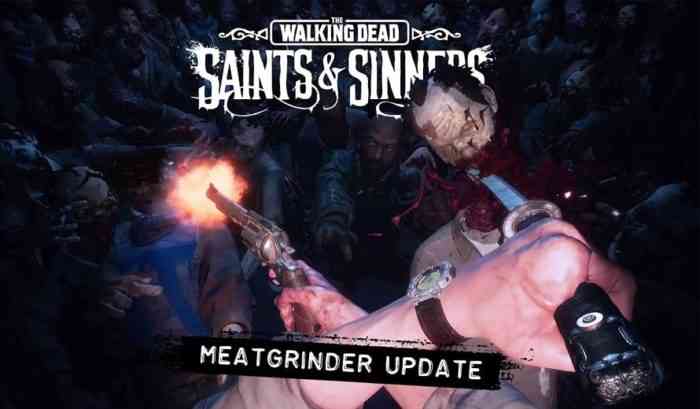 The trailer starts with some glimpses of the cemetery that the Meatgrinder Update will be debuting, along with the different accolades the game has received from different reviewers. The game mode, which is basically Horde Mode, is called The Trial. It is an arcade-style mode where the player will have to fight off walkers and get as many points as they can while surviving. Points are awarded for various types of damage dealt such as bow and arrow kills, melee damage, decapitation, and explosives. In this mode, all weapons will be unlocked, you would probably just have to run around and find them or perhaps get rewarded with them.

The Meatgrinder update is set to hit Oculus, Steam, and PSVR in July. The Walking Dead: Saints and Sinners is available now on PSVR, Steam VR, HTC Vive, and Oculus right now.

Will you be trying out the Meatgrinder? Let us know in the comments below.