Vampires are back in this year. While the game does not yet have a specific release date, Paradox Interactive has released the the contents of the Vampire: The Masquerade – Bloodlines 2 Collector’s Edition. So, no release date, but there is a price tag; now that’s business. Though sometimes you do want to know what you will get before you know when you will get it. Now that you know what you will be getting, you can decide which edition you want to get or pre-order. Don’t take lightly the choices you will be stuck with for an immortal life. 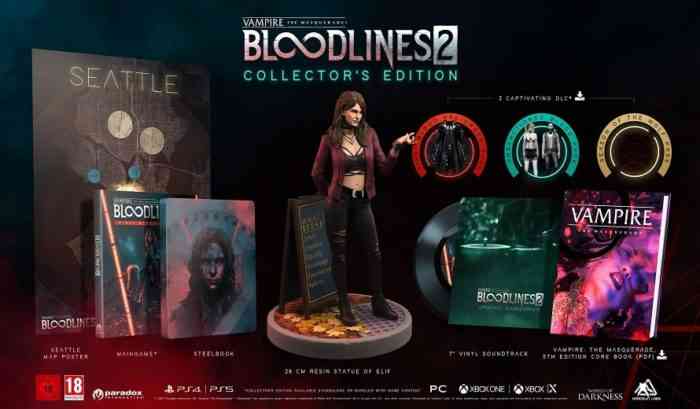 Rather than just release an image of the Collector’s Edition, World of Darkness released a brief video of its contents. Of course it comes with the base game, a map of Seattle (where the game is set), a steelbook case for the game, a 7″ vinyl soundtrack, a PDF of Vampire: The Masquerade 5th Edition tabletop game book, and a resin statue of Elif. It also comes with the extra content from both the Standard, Deluxe, and Premium pre-order packs.

The Standard pre-order (First Blood Pack) comes with a digital soundtrack, Retro Hunter outfit, Civil War Sabre weapon skin, and Engraved Pistol weapon skin. The Deluxe pre-order comes with the First Blood Pack as well as the Unsanctioned Blood Pack, which contains an in-game art book, and in-game dev commentary, Smiling Jack outfit, Jeanette outfit, Severed Arm weapon skin, Sarcophagus Table, Damsel’s Beret, Voerman Family Portrait, and Stop Sign item. The Premium pre-order comes with the First Blood Pack, Unsanctioned Blood Pack, and the Season Pass. The Collector’s Edition comes with everything, and it will be priced at $169.99. If you already pre-ordered the game, it is possible to upgrade your purchase to the Collector’s Edition for $109.99. Vampire: The Masquerade – Bloodlines 2 will be available on PC, PS4, PS5, Xbox One, and Xbox Series X.

Which edition are you eyeing? Let us know in the comments below.