It turns out racism is kind of a huge problem in EA Sports games. Team names and usernames can get pretty awful, and there’s no good way to report them. Until now, EA hasn’t taken much action regarding this problem. Now, with the death of George Floyd sparking massive protests around the globe, EA is putting their foot down. 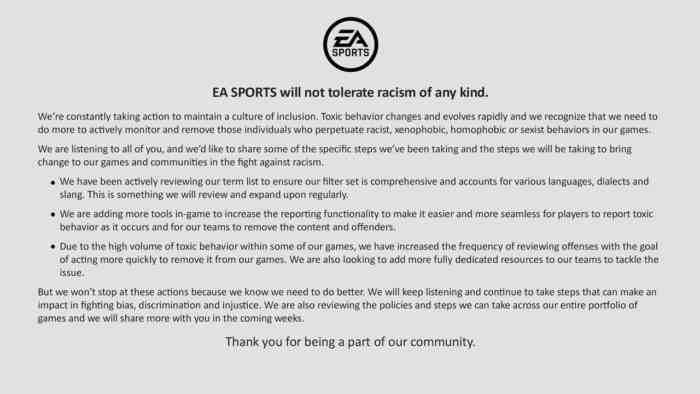 Specifically, the company is going to implement more tools for reporting toxic behavior, while also increasing the frequency at which they check for toxic behavior within their systems. Players have complained before that the reporting system for things like racist team names in NHL 20 is more or less nonexistent. With these upcoming changes, maybe people will be able to actually call out this garbage when they see it.

EA states that their search system is “comprehensive and accounts for various languages, dialects and slang.” They also posted a second statement specifically for NHL 20, which shows you how bad things are getting over there. This post mentions that the improved reporting system will be implemented for future titles. Hopefully current players will also be getting more tools for dealing with things like racist team names. At the very least, their profanity filters are getting stronger, and EA is doling out harsher penalties for people they catch doing this sort of thing. All in all, good job for eventually taking this critical step, you guys.