There is a phenomenon occurring on the streets of Los Santos. Over the course of about a year, there have been reports of GTA Online players dressing up as green aliens and running around, terrorizing other players by swarming and beating them down with baseball bats, crowbars, and even their bare fists. It’s all in good sport, but why should green people have all the fun? Recently, a rising force has appeared to combat the green aliens. A group of purple aliens has risen to rival the green aliens. Now, this Green vs Purple war has overflowed into other parts of the internet. 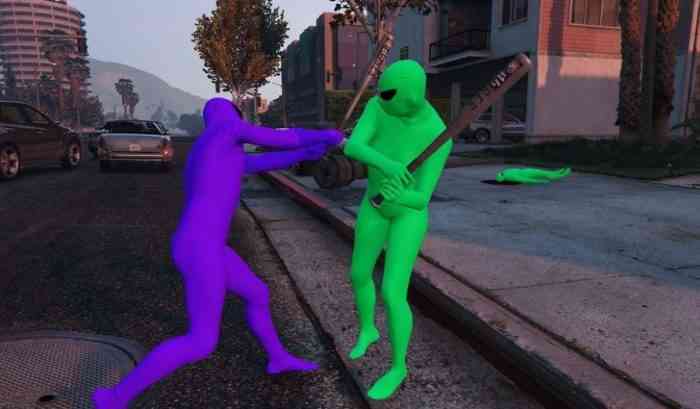 Videos of clashes between the green and purple gangs have contributed to Tik Tok and Instagram’s hottest memes of today. Everything from cruising with the purple homies, to gathering with green vehicles, to skirmishes with rival gangs, to storming stores and jumping the clerks; there are entire social media accounts dedicated to the Green vs Purple wars. It should be no surprise that this has spilled over into the meta-game of role playing. What is interesting is that secondary factions have popped up. Players “reporting” on the encounters between the gangs and militarized forces have began hunting down the aliens.

If you have yet to join the fray, there is plenty of room for you in any group. If you are joining the green, purple, or law forces, just remember to respect the freedom of the digital press. Grand Theft Auto V is available on PC, Xbox One, and PS4.

Have you joined in on the shenanigans? Let us know in the comments below.

What’s Next for Online Casino Gaming and Gambling?
Next
Huntdown Trailer Fulll of Gore, Good Quotes
Previous
Geared Up And Good to Go – The Weekends Top Deals on Gaming Gear