Prince of Persia Returns in For Honor: Blades of Persia Event

A classic Ubisoft hero from the PS2/GameCube/Xbox era is coming back. Thought it is not in a game of his own, The Prince will be appearing in the For Honor: Blades of Persia event. According to Ubisoft, this event will have two phases or chapters themed around the Prince of Persia games. You may be thinking, “Yay, I get to play as The Prince!” but you would be wrong. And as a player, you may not be too happy to see him on the battlefield. 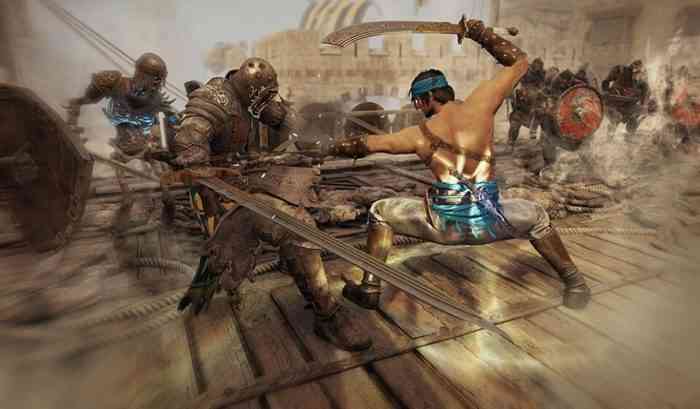 In this event, a new mode called Ruler of Time is playable on a new version of the Harbor map as a Dominion match. Harbor is ravaged by a sandstorm, changing some of its features. Periodically, The Prince will appear out of a sandstorm and attack players, no matter which side they fight for. And fighting killing The Prince is not as simple as just pushing him off the map. Like in his own games, he can reverse time, come back to a safe place, and strike you down. In the second chapter, The Prince will be transformed into the Dark Prince, introduced in 2005’s The Two Thrones. Harbor will also see a transformation at this time.

The Blades of Persia event will be adding 26 new weapons to loot and the free Event Pass allows players to unlock 30 tiers of items including a battle outfit, emblem outline, ornaments, and a Sand Mood effect. The in-game store also offers outfits of Ratash and Sandwraith, as well as executions for The Prince and Dark Prince. Blades of Persia chapter 1 is active starting today and chapter 2 begins on March 19th. For Honor is free-to-play on PC, Xbox One, and PS4.

Are you going to be playing this event? Let us know in the comments below.