Today, the second major piece of Borderlands 3 DLC is available. Guns, Love, and Tentacles will take the Vault Hunters to the planet of Xylourgos where they will attend the wedding of Sir Hammerlock and Wainwright Jakobs, planned by Gaige. You can check out our breakdown of the first area of the DLC. While we have known quite a bit about this DLC for a little while, it is a pleasant surprise to learn that Guns, Love, and Tentacles will be increasing the level cap once again. A previous update pushed it to 53, but now the level cap will be increase to 57. This increase will allow for a second capstone skill! 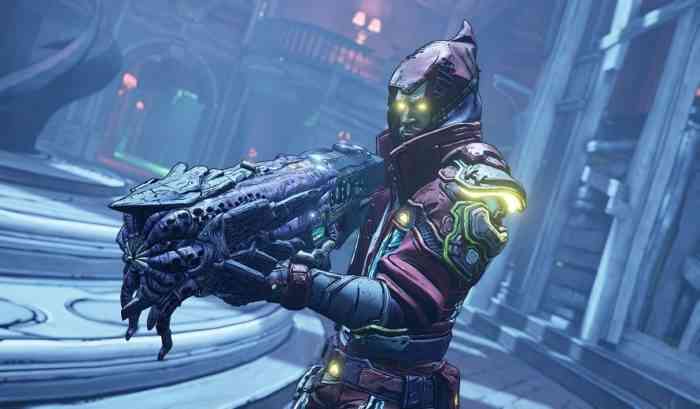 If you are not interested in the DLC/crazy, there is a free seasonal event and an update to the Mayhem system both coming next week. Revenge of the Cartels will see the return of our Saurian friend Maurice. Turns out, he is in deep with the wrong people and needs your help. You will be sent out into the world, looking for cartel members. Once you have killed enough, return to Maurice and he will teleport you to The Mansion, which will be occupied by one of the three cartels.  The different cartels will drop different loot and this process can be repeated as many times as you would like. The cartel occupying The Mansion will be random, other than the same cartel cannot occupy it twice in a row.

Mayhem 2.0 will also be launching in April. Normally, Mayhem would be accessible through an option on Sanctuary III, but will soon be accessed through the menu for on-the-fly changes. Borderlands 3 is available on PC, PS4, and Xbox One.

Will you be playing the DLC and event? Let us know in the comments below.